Worth the risk: reaching out to youth 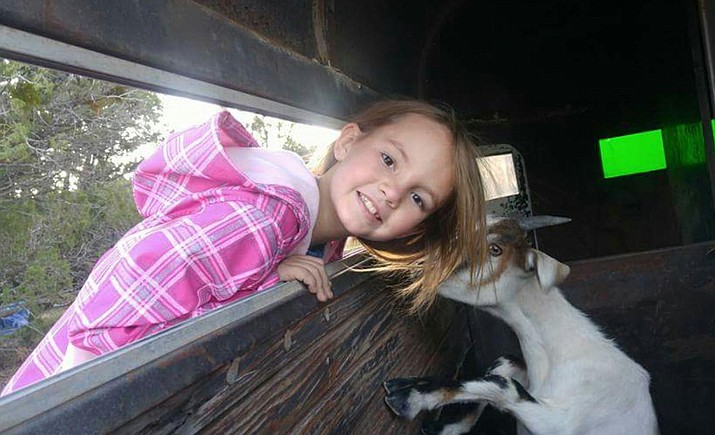 WILLIAMS, Ariz, — Finding community opportunities for at-risk youth in northern Arizona has been a challenge, but Kira Blair and Alyssa Dennison are hoping to change that with the opening of the Building Bridges Youth Farm this spring.

Blair said her work in the juvenile detention system brought to light how many children are without a positive support system and have a difficult time expressing themselves in a healthy way. She said a youth farm allows these children to work with animals and connect with mentors in a neutral environment. 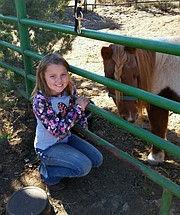 Harlee Lawson pets a miniature horse at the youth farm.

The idea for a youth farm began when Blair and Dennison worked together as corrections officers at the Juvenile Detention Center in Flagstaff. Blair ran a community service program from the facility and often took youth to local animal shelters where she found many of the troubled teens could connect with the animals.

“A lot of the boys would have this big tough demeanor and there they just played with the dogs, they were just kids again and it was really neat to watch,” she said.

Dennison said she and Blair found many youths in detention had a difficult time expressing themselves but when they incorporated animals, gardening or arts and crafts into the situation they would open up.

“They were more likely to talk and get some of those feelings and emotions out,” Dennison said. “It just proved to be a little more therapeutic than to just sit and talk.”

Blair grew up in Flagstaff raising farm animals and participating in 4-H as a child. She has worked with children in the community for the past 17 years in school settings and as a detention officer. While at the detention center she ran a community service program, facilitate the online school program and created a GED program. 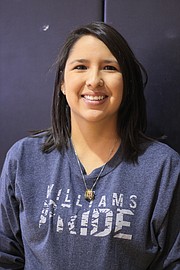 After working at a Juvenile Detention Center in Flagstaff, Alyssa Dennison joined Kira Blair in creating a farm for at-risk youth.

Dennison grew up in Williams and went through the Williams schools actively participating in sports. She graduated in 2006 and attended Northern Arizona University where she completed bachelor’s and master’s degrees in criminal justice. She worked five years at the Juvenile Detention Center in Flagstaff and now works at the Safe Child Center at Flagstaff Medical Center.

Children are referred to Safe Child Center by law enforcement agencies, child protective services and area prosecutors. The facility works with children who are victims of crime and support the efforts of law enforcement and child protective services. Dennison is a family advocate at the center. She works with families of abused children. She said Law enforcement or the Department of Child Services will bring children to the facility to meet with a forensic interviewer and while the child works with the interviewer Dennison works with the parents to find counseling and intervention resources.

Dennison said one benefit of working at the Safe Child Center is that she only works part-time. She said this will allow her to spend time helping Blair at the youth farm and spend time coaching girls volleyball and basketball at Williams High School.

Blair began creating the youth farm in May of 2016. She has formed a governing board with four members and Dennison is the president. Blair has spent months researching other facilities that use animals as therapy for troubled youth.

“We found there weren’t really aren’t very many,” she said. “There are quite a few back east but as far as I know there is nothing really like this in Arizona.”

She said there are facilities that have equine therapy or canine therapy but none that use farm animals.

The Building Bridges Youth Farm had their first fundraiser in October to raise start-up money for the facility.

Blair said a local attorney has volunteered her time to help with the articles of incorporation and a CPA has helped them organize as a non-profit. Several Flagstaff residents offered land for the facility.

“People were very generous but I chose a parcel just outside of the city limits,” she said. “It’s very close, only five minutes from town, but you feel like you are out of town.”

Matthew Blair grooms a miniture horse at the facility where Alyssa Dennison and Kira Blair plan to open a farm where they plan to use animal therapy to help at-risk youth.

The group hopes to have the youth farm up and running by April 1, 2017. Blair said she has been collecting animals at her house for the past few months.

“We have a mini horse, pot-bellied pig, goats, and a full-size horse,” Dennison said. “People are contacting us all the time wanting to donate more animals, volunteer and bring their kids.”

Blair said she has been working on the programs that will be offered at the farm. She wants the farm to be used by any youth in the area, not just those in juvenile detention. She said she wants to focus on youth in foster homes, the juvenile court system and those in counseling at first but hopes to expand that as the program moves forward.

“Any child that has experienced a traumatic life event, we want to help,” Blair said. “We want to break down the barriers using the animals and gardening as tools to help them heal.”

Blair said she is developing a program that is a tiered system that is based on the cowboy ethic. The first tier involves her taking the animals to the children’s locations.

“I plan to visit the shelter, foster homes, classrooms, and detention,” she said.

“It’s about the farm and working with animals, but it’s also about connecting with another person that is a positive role-model,” Blair said. “So as much as we want to teach life skills to them, we want to create a place that is safe and consistent and nonjudgmental where they can just grow.”

The third tier involves the youth mentoring new participants in the program. Blair said she wants the youth to learn how to mentor others who are just coming into the program. She also hopes those youth can connect with local businesses to get job experience and learn work ethics.

“I would like for them to learn leadership and job skills,” she said. “I’m hoping to partnership with local businesses who would will be willing to give them (the youth) a chance, maybe learn a trade.”

Blair said she is hoping the youth will be able to learn from the farm and job experiences and have a letter of recommendation they can take to future employers.

“The entire community has been very supportive,” Dennison said. “They all agree that we need something like this for our kids.”

Blair said the group is still seeking volunteers and donations. Anyone interested in helping with the Building Bridges Youth Farm is encouraged to visit them at their Facebook page for more information.