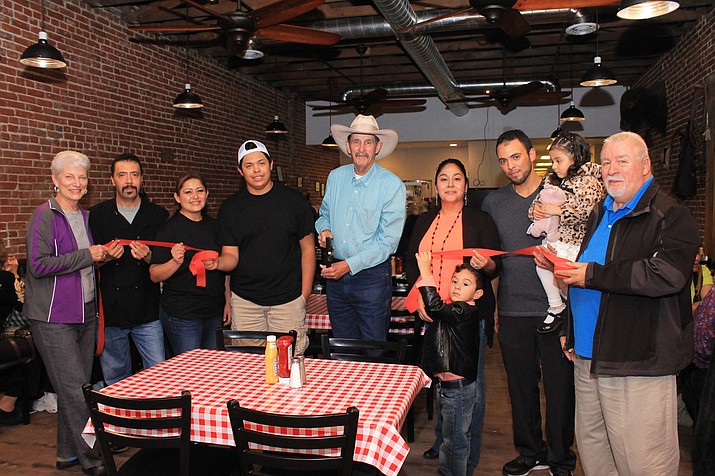 Brothers Pascual and Aladio Ramirez, along with their wives Ruth Alvarado and Debbie Ramirez, opened Mexican-American restaurant El Corral on Route 66 in October.

WILLIAMS, Ariz. — El Corral on 66, co-owned by brothers Pascual and Aladio Ramirez along with their wives Ruth Alvarado and Debbie Ramirez, opened Oct. 29. So far, the couples said opening the restaurant has been an exciting time in their lives and business is going well.

El Corral serves traditional Mexican-American dishes and is open for breakfast, lunch and dinner. Breakfast patrons are treated to traditional American fares like omelets and pancakes along with Mexican favorites like chiliquiles and huevos rancheros. Lunch and dinner entrees include enchiladas, tacos, burgers, sandwiches and fajitas, and for dessert traditional flan, cinnamon buns, cookies, pie or a variety of cheesecakes.

“We were looking at a mixture of all American and Mexican food but it seems like, so far, Mexican food has definitely been more popular,” Alvarado said. “But I don’t think we’re just going one way. Our customers come in and they’ve been purchasing both. I think maybe the name throws them off a little bit.”

Even with opening late in the season and heading into slower winter months, Alvarado said business has been steady.

Alvarado said El Corral will remain open through the winter.

“We know there are a couple of tough months coming up but we’re prepared. We knew it was coming,” she said. “Both my husband and his brother know from experience what to expect during the winter.”

The Ramirez brothers have worked for a number of restaurants in Williams. This fall they decided it was time to take their chances and open a restaurant of their own.

“It was something that had been on their mind — to open their own place and we were kind of scared but took that step and did it,” Alvarado said.

From the beginning it was decided the brothers would run the kitchen and work as chefs and the wives would be in charge of the front of the house and the business side of the operation. The couples have also hired family members and local youth as extra help.

“It’s been really good that we’ve had both couples because it hasn’t been as hard as I think it would have been on just one couple or person,” she said. “We’ve been able to take different roles and do different jobs and not be overwhelmed. We know that we can count on each other.”

Both wives work full-time jobs in addition to helping at the restaurant after they get off work.

Alvarado said they decided to lease the available space on Route 66 because of the location and its availability.

“It was very central to the downtown area and it was pretty much walk in ready,” she said. “Besides (getting) the permits all we had to do was purchase the food.”

The restaurant, formerly the Saddlebag Sandwich Shop was left completely intact, with no remodeling required.

“They pretty much just closed and left everything the way it was,” Alvarado said. “We did some rearranging but nothing major.”