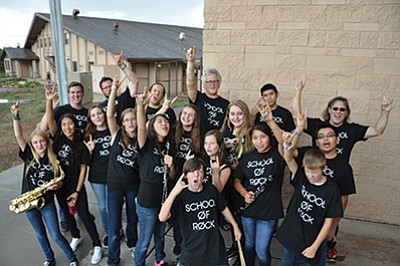 GRAND CANYON, Ariz. - It started with Green Day, paid tribute to CCR and the Beatles, and ended with students from five to 18 years old rocking out to the band's rendition of Icona Pop's I Love it (I Don't Care).

Students at School of Rock, an annual music program offered by Grand Canyon School (GCS) as part of the annual Grand Canyon Music Festival (GCMF), started as an idea. In 2006, musicians Joe Deninzon and Steve Benson helped found the program at the Canyon.

The program is open to middle and high school students at GCS and according to the festival's website, gives students "the opportunity to experience all aspects of band life."

School of Rock has become increasingly popular since it started, with many students participating for over two years. Students spend the week learning how to read music, play instruments and improve vocal performances. Their week of hard work culminates in a 40-minute concert, which they perform twice.

Every year, Deninzon and Benson travel to the Canyon from New York to perform at the festival and spend one of the two-weeks working with around 20 kids ranging from sixth to twelfth grade.

Along with classic rock staples like "Down on the Corner" by CCR and "Helter Skelter" by the Beatles, students learn to play more recent alternative rock songs by artists like Green Day, 311 and other current pop songs they can easily relate to.

"One of the most important things they learn here is how to work as a team," he said. "From the very beginning, everything becomes about the group. It's not just about them as individuals anymore."

"It's about teamwork and listening and working together," Benson said. "Everybody's part matters. It is everyone's job to make the person next to them sound better."

The students, for their part, have always risen to the occasion.

Clarinets, flutes, guitars and drumsticks in hand, some students play multiple instruments and provide vocals for the band. They learn, they rehearse and then they rehearse more through the week-long camp, knowing they will perform for their peers, family, friends and the public at Shrine of the Ages.

"The students really pull it all together," said Joe Deninzon, who founded School of Rock alongside Benson. "We try to help them, but they do all the work."

According to Kara Austin, an eighth grade student finishing her first year at School of Rock, it's an experience that everyone should try.

"It's a lot of fun, I think everyone should be a part of it," she said.

The most important thing she learned?

"Have confidence and don't be afraid," she said. "Just have fun with it."

The festival administers School of Rock with the support of GCS administration and through an Arizona Commission on the Arts grant, state of Arizona and National Endowment for the Art funding, the Grand Canyon Rotary club and the Tusayan Sanitary District.