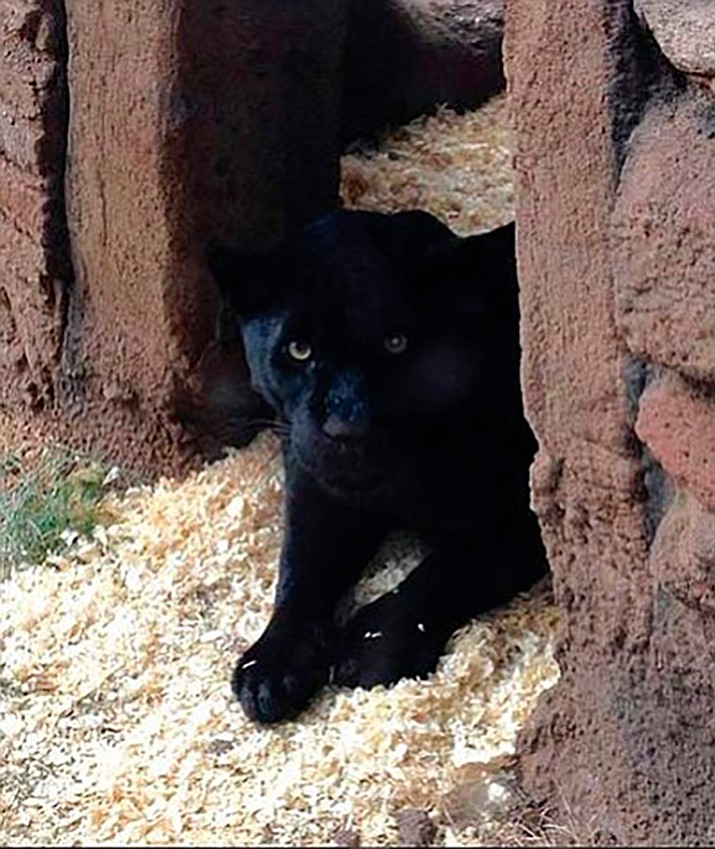 Serafina is the new jaguar at Bearizona. Photo/courtesy of Bearizona

The jaguar is the first large cat at the drive through wildlife park. Photo/courtesy of Bearizona

WILLIAMS, Ariz. - After spending more than a year on the exhibit, Bearizona unveiled its newest animal, a black jaguar named Serafina Aug. 14.

Visitors were able to see two-year old Serafina in a newly designed habitat with a Native American cliff dwellings theme.

The jaguar is the third-largest feline after the tiger and the lion, and the largest in the Americas. The jaguar's present range extends from Southwestern United States and Mexico across much of Central America and south to Paraguay and northern Argentina. Jaguar conservation status is listed as near threatened with the majority of wild jaguars living in the Amazon where they face substantial habitat loss.

The World Animal Foundation estimated there are only an estimated 15,000 jaguars that remain in the wild.

"What we're really about is education," said Bearizona animal trainer Dave O'Connell. "If people don't know about these animals and know that there is a crisis, that their habitat is going away, who is going to do something?

O'Connell said he carefully trains the cat using operant conditioning. He uses positive rewards to encourage the behavior he wants from the cat.

"We ignore the stuff we don't like and reward the rest," O'Connell said. "It's important for people to see how good this stuff actually is."

O'Connell watches Serafina's behavior and adjusts her diet based on her activity. The park feeds her around four pounds of food per day which consists of meat and a special large cat food called feline diet.

"It's specifically made for big cats so we give her that most days," O'Connell said.

The feline diet has grains and other ingredients that are similar to what a jaguar would eat in the wild.

"They love it," O'Connell said.

The park also feeds the cat donations of elk, venison and other meat donated from Arizona Game and Fish.

"They get a pretty varied diet," O'Connell said. "Four pounds for a 160 pound cat doesn't seem like much but a cat in the wild isn't going to eat every single day. They might eat one deer in two weeks. What we feed them every day is what they would get feeding them once per week or so in the wild."