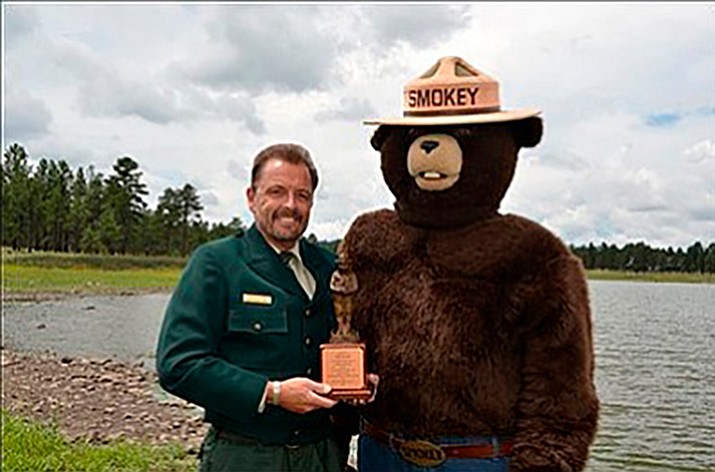 WILLIAMS, Ariz. - After achieving two years of zero human-caused wildfires on the Tusayan Ranger District of the Kaibab National Forest, fire prevention specialist Bob Blasi was recently honored with a prestigious award for his outstanding work and significant program impact in wildfire prevention.

Blasi was selected to receive a 2016 National Smokey Bear Award, which is the highest honor one can receive for accomplishments in preventing wildfires.

"These awards remind us of the hard work our employees and cooperators do to reduce the threat of human-caused wildfires," wrote James E. Hubbard, deputy chief for state and private forestry, U.S. Forest Service, in a letter announcing award recipients.

The Forest Service gives out three levels of awards each year - gold, silver, and bronze. All three of the award categories are the highest level of recognition possible, with the only difference being the geographical sphere of the nominated work - national, regional and statewide. Blasi received a bronze award because of the statewide impacts of his efforts.

"We could not be more proud of Bob and the incredible work he has done over the years," said Heather Provencio, supervisor of the Kaibab National Forest. "This is an enormous achievement and one that will hopefully draw attention to the critical role our fire prevention specialists play in keeping our forests and communities safe and healthy."

Blasi's selection for the Smokey Bear award was due, at least in part, to the fact that in both 2014 and 2015 he led the Tusayan Ranger District of the Kaibab National Forest to achieve his longtime vision of zero human-caused wildfires, which according to forest records hadn't happened since 1965, some 50 years earlier.

"Bob successfully reduced human-caused wildfires to zero for two years running," said Quentin Johnson, fire management officer for the Tusayan Ranger District. "Given that the district receives millions of visitors each year because it is located immediately adjacent to Grand Canyon National Park, this was an incredible challenge if not an almost impossible task."

Johnson added that while the district had averaged about seven human-caused wildfires per year over the last 20 years, there were actually many summers during which Blasi documented 200 or more abandoned campfires and extinguished them before they were declared wildfires. It quickly became clear to Blasi that he needed to focus his fire prevention efforts on chipping away at these abandoned campfires, which had become the leading source of human-caused wildfires in the Tusayan area.

Over time, Blasi worked to gain compliance in dispersed camping areas and issued citations when necessary. With increased early-morning patrols, an extensive signing program, visits to local schools, Smokey Bear presence at local events, and a consistent prevention message for 16 years, Blasi was able to systematically reduce the number of abandoned campfires and, therefore, the overall number of human-caused wildfires.

"Passionate and dedicated fire prevention specialists like Bob Blasi are preventing wildfires all season long. When they are not in the woods talking to forest visitors or extinguishing unwanted fires, they are in classrooms, chamber of commerce meetings, city council meetings, and other community meetings sharing why fire prevention is important and educating youth and adults on what they can do to prevent fires," said Bill VanBruggen, director of fire, fuels and aviation for the U.S. Forest Service's Southwestern Region. "Wildfire prevention is an important component in keeping destructive and unwanted fires from damaging our forests. Some of Arizona's largest and most destructive fires have been caused by careless acts like abandoned campfires."

Besides implementing more traditional fire prevention techniques such as patrols and signing, Blasi has also played an active role in the Kaibab National Forest's overall commitment to restoring fire-adapted ecosystems. Blasi has been instrumental in helping manage lightning-caused wildfire that has been allowed to spread across thousands of acres of the forest and in supporting thinning projects and prescribed fires.

"Nearly 45 percent of the Tusayan Ranger District has been treated with thinning and fire over the last 13 years, and this is a huge part of reducing human-caused wildfire," Johnson said. "Because most of the popular camping areas have already been treated with fire at appropriate times of the year, these areas are less likely to accidentally catch fire during the hottest, driest months."

It was Blasi's recognition that all of these fire prevention tools must be used in combination, and the fact that he consistently put energy into all of them, that he was able to be successful in attaining the goal of zero human-caused wildfires.

"We have a very proactive fire management program here in Tusayan that has been successful for over 20 years. I have been fortunate to be a part of this and several of the remarkable records that have been accomplished here," Blasi said. "Our community has come to learn the importance of living in a fire-adapted ecosystem and understands the critical work we do to ensure long-term, sustainable forest health. That simply takes time. Eliminating unwanted, human-caused wildfire is just one of many beneficial consequences of this work being done by all the dedicated employees of the Kaibab National Forest."

The National Smokey Bear Awards Program is sponsored by the U.S. Forest Service, the National Association of State Foresters, and the Advertising Council. These merit awards have been bestowed on well deserving groups and individuals annually since 1957.