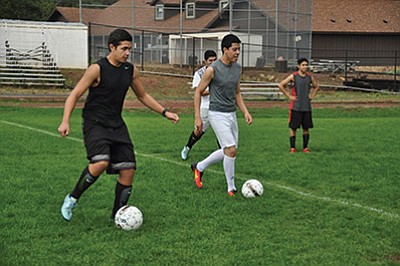 GRAND CANYON, Ariz. - With two weeks to go until their first game of the season, the Grand Canyon High School soccer team is hard at work.

The largest team on record, with 11 girls and 19 boys, the Grand Canyon Phantoms will be the only co-ed team in their division this year. With 100 high school students at the school, they have enough players to field separate teams, as they had last year, however, Head Coach Kaitlyn Russell said the students voted to combine boys and girls soccer into one team.

"These kids are dedicated and they're super excited," Russell said. "They respect each other and they choose to play together, even though it might mean less playing time."

Russell said one of the biggest changes she's noticed during her time as head coach is the attitude of the kids. Soccer wasn't taken seriously as its own sport in the past - the students were simply filling time until basketball season arrived.

In the past few years, she's seen that change. The students are now excited to play soccer.

Russell attributes the expansion of the high school soccer program to the success of the middle school team, which won its division championship three years ago. Some of the nine freshmen joining this year's team were members of that winning team, and their excitement about the sport is contagious to the other players.

The rest of the team is spread fairly evenly between sophomores, juniors and seniors.

Continuity throughout the program is also something that Russell and Assistant Coach Jesse Magana have worked hard to instill. Russell teaches English, social studies, physical education and computer science at the middle school, while Magana is the Fit Kids instructor.

According to Russell, continuity helps the kids stay engaged and eager to do well for their coaches.

"I love the kids I taught in middle school, and I'm glad to be working with them here," she said. "It's encouraging to the players too, because they know we want to be with them, we want to stay here and coach them."

The Phantoms recently switched AIA divisions, and their first game will pit them against the number one team in the state, Chino Valley High School.

"They're nervous," said Russell, "But they're also pumped, and they are working hard."