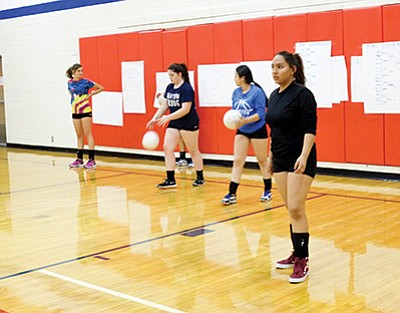 GRAND CANYON, Ariz. - With two weeks of practice under their belt, the Grand Canyon Lady Phantoms volleyball team is gearing up for a new season.

With 13 girls on the team - five freshman, four sophomores and four juniors, Lady Phantoms' Head Coach, Gretchen Bilton, said they have a lot to learn.

"I've got a couple girls who have never played before - some of my sophomores," Bilton said. "I've got a little bit of advantage because I've coached the freshman as middle schoolers and some of the sophomores as well. I don't know any of the juniors, I've never coached them."

This is Bilton's second season as a high school volleyball coach. She has 15 seasons coaching experience, mostly at a middle school level.

"We're looking pretty good, our juniors are a pretty strong group, so that is good," Bilton said. "With new coaches coming in this year it's a rebuilding for everybody."

Bilton and assistant coach, Leann Martinez, are excited about the team and the players they'll work with this year.

"We've got a lot of potential," Bilton said. "We are kind of physically short, we don't have any real tall girls but I think they're going to be pretty quick, so that will help us."

Bilton has the girls practicing immediately after school, four days a week.

As they prepare for their first games, Bilton said she has players building stamina and working specific drills on how to cover the net.

"A little more conditioning, because summertime is always a long time for people to not be doing a lot (physically)," Bilton said. "So we are working on that and on how we can cover the net, since we are a pretty short (team). Working on different coverages too. Our serving, we haven't got into too much. Having coached a lot of these girls before I think our serving is going to be pretty good."

The Lady Phantoms play their first game against Williams Sept. 6 at Grand Canyon at 6 p.m. and immediately follow that game with the Ash Fork Tournament Sept. 9 -10 in Ash Fork.