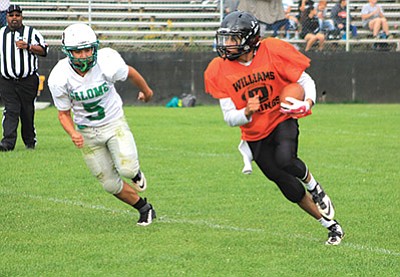 Vikings quarterback Martin Soria beats a defender and takes the ball for some yardage during the scrimmage against Salome Aug. 20. Wendy Howell

WILLIAMS, Ariz. - The Williams Vikings are gearing up for a new season after getting their feet wet in a scrimmage with the Salome Frogs Aug. 20.

The Vikings worked their offensive and defensive plays against the Frogs which gave head coach Jeff Brownlee a chance to see how much the summer work has paid off.

"I'm really impressed with what I see defensively," Brownlee said during the game. "We still need some work on our offensive plays though."

Brownlee has 36 players who turned out to play for the Vikings this year.

"That is fantastic because with numbers like that it allows us to run a strong JV program," he said. "Last year we had 22 kids, and the year before was about the same. So our JV program wasn't as strong as it should be.

Brownlee said having a strong junior varsity program is important for the entire football program. He said the team can mirror the varsity program albeit with a simplified offensive schedule.

"This years JV team is going to run a lot of the varsity plays which is going to help our whole program so that will really help us in years to come," Brownlee said. "Our numbers are fantastic."

Brownlee said he hopes to work the players on both sides of the ball. He said he wants to get his strongest athletes in but having more depth allows the athletes to rest more between plays.

"We're going to try to do that as much as we can," Brownlee said. "I like to have the best eight ball players out there I can, but this allows us to give the guys some rest. We have good competition in all positions this year. If a kid needs to step down or take a break we definitely have a kid who can fill who is almost as good as the starter."

Brownlee said the team has a much better understanding of eight-man football this year. He said he is excited about facing a new season with high numbers and depth at every position. Brownlee said he especially has a lot of depth at the skilled positions such as quarterback, running back and wide receiver.

"We aren't as deep on the offensive lines, we call them our bigs," Brownlee said. "When you drop down to some of the freshman and sophomores they are still understanding their own moves, but the big thing is learning to be physical."

He said the younger players are learning how to have a battle mentality on the offensive and defensive lines.

"When you're on the offensive line you're in the trenches every play," Brownlee said. "You're getting beat up on and beat up on, so that's where our skills come in. They need to be able to run and cut and jump and catch the ball."

"Overall we are in a great position this year for player turnout, it helps the program," he said.

"That freshman class is really stepping up," he said. "They're going to fill some voids for us on the special teams. So it's exciting to see. Everyone wants numbers and we got numbers this year so were going to use it to our advantage."

Brownlee said he has just two sophomores this year but has 14 freshman. He said ideally he would like to see 10 players turn out from each class to have a team of 40 players.

"This is a large freshman class," he said.

Brownlee said he and the other coaches closely script each practice to give everyone some time on offense and defense. He said he likes to give them a lot of time in different places to understand the system.

The JV does not run the entire offense like the varsity, we take baby steps," he said. "They scrimmage the varsity a lot so they can work their offense and defense as well. Plus they need to be our scout team where they mimic their offense and run scout offense as well. That's why it's so important to participate in 7 on 7 so they can learn the passing routes and go to mini-camp so they understand our system and build on it when the system starts."

Brownlee is excited to face Bagdad and some of the other tougher teams this year. He said last year at this time the team was just learning 8-man but this year the team is really fine-tuning their plays.

He said Bagdad, Superior, St. David and Valley Union will be some of the toughest teams this year.

In league play Williams is in 1A North this year along with Greyhills, El Capitan, Fredonia, Joseph City, Mogollon and Rough Rock.

Williams travels to Hayden Aug. 26 and has their first home game with Rough Rock on Sept. 8 at 7 p.m.