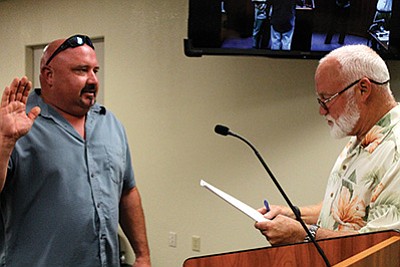 Sanderson resigned his seat in order to run as a private citizen for the mayor's office in the November election.

Schoppmann was originally sworn in as a newly appointed council member in September 2015 following the resignation of former councilman Bill Fitzgerald. At that time it was determined Schoppmann would serve on the town council until the next election.

According to statute ARS9-235 of Arizona State Legislation, 'the council shall fill a vacancy that may occur by appointment until the next regularly scheduled council election if the vacancy occurs more than 30 days before the nomination petition deadline, otherwise the appointment is for the unexpired term.' Sanderson's unexpired term Schoppmann now holds, expires in 2018.

After filling Sanderson's seat with Schoppmann's appointment, the council is still deficient one seat. According to Tusayan Mayor John Rueter, the seat needs to be filled before the November election.

"One seat has the remainder (unexpired term) on it until November," Rueter said. "Hopefully at the next meeting we'll be looking at filling that seat."

"Schoppmann resigned his seat, which was expiring at the November election," said Tusayan Town Manager, Eric Duthie. "He was appointed to a two year term that was left by Sanderson. Because Sanderson resigned after a certain date, under state law the person filling that seat is appointed for the remainder of the term."

The position will be filled at the next election.

"We have counted Bill Fitgerald's seat, since its expiring in this election, as the new term for the mayor," Duthie said. "The mayor only has a two year term. So Fitzgerald's seat, which Schoppmann's sitting in expires at the end of this election so it becomes the first elected mayor's seat who has to run every two years. This way it leaves Schoppmann and Rueter, if they want to run for reelection, their terms expire in two years. Montoya and whoever gets elected get a four year terms."

There are currently two, four year seats for council on the November ballot.

Following a ballot printing error by the town of Tusayan, voters will not be able to cast primary votes for town council candidates, however, according to a press release by the town, the primary election will proceed, but only to fill the office of mayor.

Ballots for county, state and federal candidates or initiatives for the August primary will proceed and will be counted.

"After the ballots had been printed and it was too late to change the print we discovered we were in error," Duthie said. "What we had listed was a one four year council term and two, two year council seats to fill. In reality it was two, four year terms and no two year terms to fill by election."

Sanderson is running unopposed for the office of mayor. That portion of the Tusayan primary election will be correct and will be counted.

The primary election was set to take place Aug. 30. The general election is Nov. 8. Polling will take place at the Tusayan Town Hall 845 Mustang Drive, Tusayan.