Pilot in training: Grand Canyon steps in to help train the next generation of park service pilots 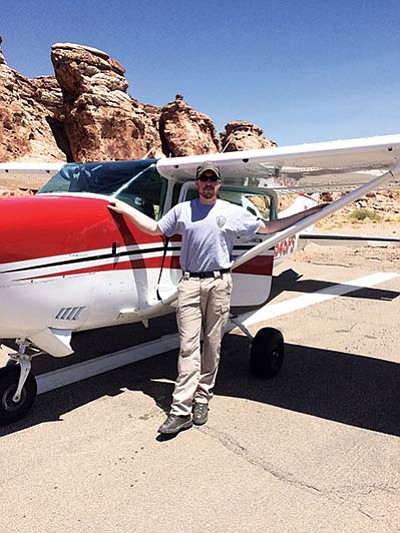 GRAND CANYON, Ariz. - The Bering Land Bridge National Preserve in northwest Alaska is big - 2.7 million acres type of big and getting around that much country is no easy task. That's one reason the National Park Service (NPS) hires and trains pilots to fly into and out of the preserve.

Knowing how to fly in the Alaskan back country for the NPS takes talent and ambition - the NPS chooses its pilots and spends many hours and dollars having them trained to be the best. The only way to have the best pilots is to have them trained by the best. In June, Walker Gusse flew down from Alaska to Grand Canyon National Park (GCNP) to spend one week training with Galen Howell, the only fixed wing pilot employed by GCNP.

"Galen is one of our park service mentor pilots. He is a phenomenal pilot and flight instructor," Gusse said. "People, like myself, who are inexperienced get to come down and fly with senior pilots who have a whole career's worth of experience. Instead of when they leave, having that knowledge go away, the park service tries to pass the torch a little bit and we (less seasoned pilots) try to learn as much as we can from them."

Gusse has been flying privately since 2013 when he bought a plane and started flying for the hours and experience. He has worked in law enforcement for the NPS since 2004. Today, Gusse has dual functions working in both law enforcement and aviation for the park service. Originally from up-state New York, Gusse has a bachelor's in Aviation Technology from University of Alaska Anchorage. While attending the university he heard about the dual function aviation and law enforcement position with the NPS and decided to become a park ranger while working on his pilot training. Starting as a seasonal ranger, Gusse worked in various parks around the U.S., including Grand Canyon. He received permanent status with the park service as a law enforcement ranger and landed a district ranger job at Bering Land Bridge National Preserve. Gusse bought his small plane during this time to work toward getting enough flight hours and experience. Gusse said it is common for dual function NPS pilots to purchase their own planes to get the experience and hours needed for the job.

"The park service requires 500 hours of pilot in command, which means you are flying the plane," he said. "Now that (NPS) has decided to get me into the aviation side of things they're giving me training and experience."

Gusse was given the choice between Grand Canyon and Lake Mead for his training and said he picked Grand Canyon for obvious reasons.

"It's amazing and I also worked seasonally here a long time ago," he said. "In Alaska you fly with whichever mentor is available. You jump in and go with whoever is close to you."

In addition to Howell, other park service mentors are available across the state of Alaska and at various locations in the lower 48.

Gusse was the second pilot Howell trained this year. In 2015 he trained several others, saying the number of trainees per year varies, depending on the rate of retiring park service pilots in each season.

"It seems like we go through phazes where people will retire and then we bring in new people," Howell said. "Sometimes it could be a couple a year and sometimes one every two years."

The training Howell gives pilots is designed to give them experience flying a fixed wing aircraft in different flying environments - at Grand Canyon that means hotter temperatures and higher altitudes.

"In Alaska, where (Gusse) flies, the main challenge is weather - it can change very quickly there," Howell said. "So down here that's not as much of an issue, but we fly in hotter temperatures and higher altitudes. That is one of the main benefits he will get from flying down here - is flying an environment where the aircraft performance is not as good as it is at sea level where he flies in Alaska."

During the training, Howell and Gusse flew around and over the Canyon, landing at Tuweep on the northwest rim of the Canyon and at the Kingman, Flagstaff, Page and Lake Powell airports.

Because of the hotter temperatures and stronger winds, Gusse said he needed to accustom himself to how differently the plane flies under those atmospheric conditions.

"(The training) is really trying to push my comfort level from where it was to closer to Galen's - even though I'm not even remotely close to his. It's moving it forward a little bit," Gusse said. "The only thing that has taken me off my guard here is the constant turbulence. In Alaska it's pretty smooth, but here as soon as the wind starts blowing in the afternoon, it's pretty bumpy."

Upon completing training and gaining required flight hours Gusse will conduct hunting patrols, help with search and rescue operations, and resource missions in addition to any other park missions.

"The primary reason we have the dual function law enforcement pilots is because we have these vast expanses of land masses that we can't access or patrol to check on hunting and things like that," Gusse said. "If I do ground patrol in the middle of winter I might snowmobile or snow machine in but it would take a two week expedition to check on a couple of hunters. I can do the same thing (in a plane) in four or five hours. It's resource management as far as personnel and time and safety."

Gusse said the biggest take-away from his training at Grand Canyon was learning that his limits can be stretched.

"I would say that when I first came in (for training) I was at a way different level - comfort wise, then where I'm at today," he said.