AzMerit scores on the rise at Williams schools 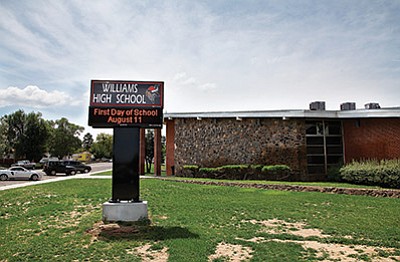 WILLIAMS, Ariz. - Superintendent Rick Honsinger was pleased with the preliminary results of the 2016 Arizona's Measurement of Educational Readiness to Inform Teaching (AzMerit) testing for Williams Unified School District (WUSD) and expects those scores to continue to rise over the next few years he said at the Aug. 10 governing board meeting.

Honsinger said every grade at WUSD had an increase in percent passing in math and English-language arts over last year's results and many grades made significant gains.

"Overall we just knocked the socks off this test in one year's time," Honsinger said. "We went from very low to passing the state average in a lot of areas."

Preliminary AzMerit results were distributed to school districts but the official release of more comprehensive scores will not be released until Aug. 29. However, Honsinger does not expect any of the results to change for WUSD.

AzMERIT is an annual statewide test given in the spring that measures how students are performing in English, language arts and math. It is considered more rigorous than AIMS, its predecessor, because it tests students on Arizona's College and Career Ready Standards, which are based on the Common Core initiative. It is given to students in grades 3-11.

"You really have to compare yourself (WUSD) to the state because the test can change from year to year so the norm is decided by the state," Honsinger said.

Honsinger attributes the rise in scores to staff more closely following the Beyond Textbooks curriculum and providing more training for those teachers in using the curriculum.

"We had Beyond Textbooks for a year before I got here, but it just wasn't being used with integrity," Hosinger said. "Last year we made it clear that that was our curriculum and we all were going to follow it."

Honsinger said the teachers bought into the curriculum and worked hard to implement it.

"The next thing is to own your score," Honsinger said. "You don't blame other factors for low scores. You look at them and say we need to do something about this. The expectation was that we are going to have higher scores this year. We can do this and we felt rewarded when they came back higher."

Honsinger said there are several ways to analyze the results of the AzMerit test. He said it is good to look at one grade and compare to the same grade the following year, but more importantly it is good to look at the cohort and compare. For example, sixth graders only had eight percent pass the math portion of the test in 2015, but as seventh graders they had 28 percent passed in 2016.

Algebra I students in 2016 also had significant gains when looking at the cohort. Only 7 percent passed the eighth grade test in 2015 but that same class had 50 percent pass the Algebra I test in 2016.

"It jumped up to half the kids passing the test in a year's time," Honsinger said. "That's a huge gain. They had phenomenal growth."

Honsinger pointed out that only 12 percent passed Algebra I in 2015 but that same class had 40 percent pass Geometry the following year. He said not only did they make huge gains, but they surpassed the state average of 35 percent passing.

"I can't help but think the seventh grade teacher is going to have it even better this year because they (the teacher) will be getting a group of kids that is further along than last year. So it just should domino into better and better scores if we keep doing good things," Honsinger said.

Honsinger said he and the WUSD teachers are looking at more than just who passed and who didn't. He said the results are divided into four performance levels: minimally proficient, partially proficient, proficient and highly proficient. The latter two categories are considered passing.

He said they will be looking at how close some of the students are to passing. He hopes to move students up the chart and see growth every year.

"In fourth grade, when we compare to the state, we say 'let's work on the upper level kids'," Honsinger said. "The results are more useful than just who's passed and who has not passed."

Honsinger said administrators have met with teachers already and have set goals for the upcoming school year. He said the teachers are looking at the past year's results and are not only hoping to get more students passing, but to also push those that are passing into higher levels of learning,

Not a single grade had a decline in scores at WUSD, however, scores did decline in some areas in the state results. Eighth grade math declined for the state which was most likely due to the omission of high performing eighth grade students who were not required to take the eighth grade math assessment because they were enrolled in advanced math classes. Eighth grade students who were in high school-level classes, such as Algebra 1, Algebra II or Geometry, no longer had to take the eighth grade assessment which was a change from 2015.

Many third grade parents were eager for the results of the AzMerit because students who scored the lowest on the third-grade reading portion of the state's standardized test would be held back a grade under the state's Move On When Reading law.

"We were expecting to do better and I think each one of us pushed ourselves to make sure we found those results," Honsinger said.

"This just reinforced our belief that we can do better, that our kids are smart in Williams, that our teachers are good teachers and that we do have the right support system," Honsinger said. "We know Williams can be a good school so we really feel good about this year and where we can go with it."