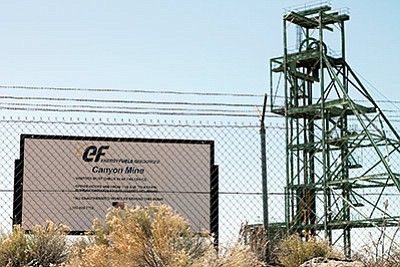 The Canyon Mine, located around six miles from the South Rim entrance gates of Grand Canyon National Park, is one of three uranium mines seeking renewal permits from the Arizona Department of Environmental Equality. Loretta Yerian/WGCN

GRAND CANYON, Ariz. - On Aug. 15, environmental groups asked the Arizona Department of Environmental Quality (ADEQ) to deny air permits for three uranium mines near Grand Canyon and to continue monitoring an inactive mine.

According to the Grand Canyon Trust, Sierra Club and the Center for Biological Diversity, the mines are located within watersheds (surface and ground) that drain directly into Grand Canyon National Park (GCNP) and threaten water, air and resources of the greater Grand Canyon eco-region, including soil, wildlife, sacred American Indian sites and the health of people exposed to the heavy metals.

According to the groups, some of the metals could include arsenic and lead.

The groups filed comments with the department outlining ongoing concerns with the four uranium mines and noted that in 2010 they, Coconino County Supervisor Carl Taylor and hundreds of citizens objected to issuing air permits for these mines because of unacceptable risks to residents and visitors to the Grand Canyon region. The state agency has yet to address the substantive issues that were raised.

"For more than a half-century, uranium mining has permanently polluted our land, air and water. Its deadly legacy is well documented and yet state and federal agencies are still permitting new mines," said Sandy Bahr with Sierra Club's Grand Canyon Chapter. "Given the proximity of these mines to Grand Canyon and the history of contamination, ADEQ should give these mines the utmost scrutiny and reject these permits."

According to Energy Fuels, a June 27, 2012 technical report prepared in accordance with National Instrument 43-101 - Standards of Disclosure for Mineral Projects ("NI 43-101"), the Canyon deposit contains 83,000 tons of Inferred Mineral Resources with an average grade of 0.98% eU3O8, containing 1.63 million pounds of uranium.

Stephen P. Antony, president and CEO of Energy Fuels said in the press release that the results of the underground drill program at the Canyon deposit are very positive.

"We have long known that the Canyon deposit boasts world-class uranium grades, and we have the potential to increase the tonnage to be mined through underground delineation drilling," he said. "Historically, uranium produced from other similar deposits in northern Arizona was low-cost and competitive globally with other low-cost underground uranium mines, including mines in Canada. In addition, the Canyon Mine enjoys other important advantages. It is fully licensed and permitted. It is at a very advanced stage of construction, with all surface development completed and the shaft is close to being complete. And, the mine is located within economic trucking distance of Energy Fuels' White Mesa Mill, which is licensed, operating, and has the capacity to process the Canyon material into finished yellowcake that can be sold to global nuclear utilities. We look forward to completing our current drill program, potentially performing future delineation drill programs, and continuing to confirm the size and quality of the resources."

In addition to the delineation drilling, the company is also continuing to sink an eight by 20 foot mine shaft, which will be used to access the deposit. The shaft is currently at a depth of 1,100 feet.

"Once again we see the cumulative evidence of uranium contamination," said Roger Clark with the Grand Canyon Trust. "When will the Grand Canyon State stop issuing permits to pollute our air and water?"

ADEQ will consider all comments received in making a final decision on the proposed permits. Grounds for comment are limited to whether the permits meet the criteria for issuance spelled out in the state air pollution control laws or rules.