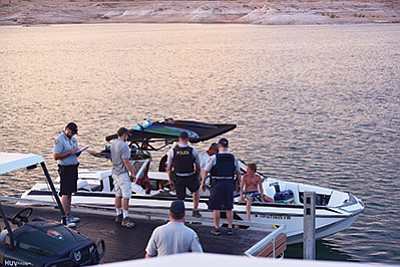 Interagency officers perform an Operating Under the Influence and safety check on a boat at the Antelope Point Marina Aug. 13. Photo/courtesy of Coconino County Sheriff’s Office

PAGE, Ariz. - On Aug. 13 law enforcement agencies in northern Coconino County conducted an Operating Under the Influence (OUI) and Boating Safety Checkpoint at the Antelope Point Marina on Lake Powell from 3 to 7 p.m.

The purpose of the checkpoint was to identify impaired operators and get them off the waterways and to inform and educate the public on the dangers of impaired boating.

Officers checked 110 vessels containing 514 passengers and operators for safety equipment and impaired operation. A total of 14 citations were issued and 14 OUI investigations were conducted. One arrest was made for OUI of alcohol and/or drugs. Citations included violations for lack of personal flotation devices, fire extinguishers and boating registration. During a similar boating safety detail in 2015, 63 vessels were contacted, 20 citations were issued and no impaired boat operators were arrested.

First time offenders of OUI has a minimum fine of $1,508.88 with the possibility of up to 10 days in jail and mandatory alcohol screening. Fines and jail time increase with intoxication levels of the operator and for multiple offenses.

Coconino County said the objective of the weekend checkpoint was to send a clear message to those who are considering operating a watercraft after consuming alcohol or drugs and that OUI will not be tolerated. Twenty-three law enforcement officers and deputies from the Coconino County Sheriff's Office, Arizona Game and Fish Department, National Park Service and Page Police Department conducted the checks. Two volunteers of the Coconino County Community Emergency Response Team also assisted. Coconino County Sheriff's Office would like to specifically thank the staff at Antelope Point Marina for their support in the planning and operation of the checkpoint.