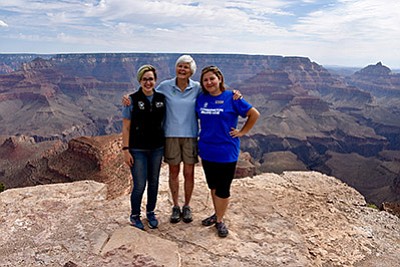 GRAND CANYON, Ariz. - From July 24-29 student from across the U.S. descended upon Grand Canyon National Park (GCNP) for a week of training, workshops and volunteering.

The 2016 Break Away Alternative Break Citizenship Class (ABC) was the largest group yet in the six year partnership with the National Park Service (NPS), with 73 participants representing 39 schools attending.

Since 2010, GCNP has partnered with Break Away, a nonprofit organization that provides leadership training for university students participating in Alternative Break (AB) trips. The breaks provide students the opportunity to go on volunteer trips and engages them in weeklong service trips which focus on specific social issues, according to alternativebreaks.org.

"Through Alternative Breaks, we hope to foster the personal growth of contributing members of society," the AB website said.

Break Away promotes the development of Alternative Break programs through training, assisting and connecting campuses and communities. It provides the tools and support to foster successful AB's for students.

For many students participating in the week long ABC class at GCNP, it was an opportunity to learn how other university campuses organize and lead AB trips. It was also many student's first visit to Grand Canyon National Park.

"I think that for a lot of us this is the first time we've been to a national park in the first place and to come to Grand Canyon, this jewel park - the view and everything about it is so magnificent," said Iffa Vhuiyan, a junior at the University of Wisconsin in Madison.

Majoring in electrical engineering and environmental studies, Vhuiyan said her time at Grand Canyon was an immersion in how the park works - specifically wildland fire, since students spent part of their time volunteering with fire crews.

"When I saw Grand Canyon I thought, 'wow, this might the one and only opportunity for me to go to a national park. I've never been to one," Vhuiyan said. "I thought with my different environmental interests I've had in school and hearing all the kids in my classes say, 'yeah, I've been to this and this national park...' I just thought it would be so neat if I could experience just a glimpse of that."

Vhuiyan first became involved with AB her freshman year of college. Her first break took her to New Orleans, Louisiana, where she volunteered with nine other students helping with disaster relief of people who were affected by Hurricane Katrina in 2005.

"It opened up my eyes to a different community and culture," she said. "I felt very emotional there and I felt like I was making an impact. That's when I wanted to be more involved with this program."

Last year Vhuiyan created an AB for a different organization she was involved with. During that break she and other students went to St. Louis to help with demolition of houses impacted by flooding. Vhuiyan said that experience fueled her desire to be more involved and in 2015 she applied to be director of Alternative Breaks at the University of Wisconsin. To prepare her for leadership and creating successful ABs for students Vhuiyan decided to attend an ABC class and chose Grand Canyon for her location.

During her time at the Canyon, Vhuiyan said she learned a lot about how the program works at other universities as well as the importance of volunteer work from a community viewpoint.

"I learned that it's not about the volunteers, it's about the community that you're helping," she said. "It's going into a community and asking, 'what do you need from us?' Also, not all aspects of volunteering is glamorous and great, you might not find the meaning of it at the exact moment you're doing it but being patient to see the long term effects and how you played a role in creating that."

The focus of the week for students, according to Nisha Kavalam, a representative of Break Away working with students during their time at GCNP, was participating in service work with Grand Canyon's Wildland Fire management crew and studying the human connection with nature.

"We're talking about our appreciation or understanding of nature and how sometimes there's a disconnect," Kavalam said.

Throughout the week, Kavalam said student's worked in groups and discussed reasons for that disconnect.

"We've kind of identified the National Park Service as a really great entity to have people practicing that connection to nature," she said.