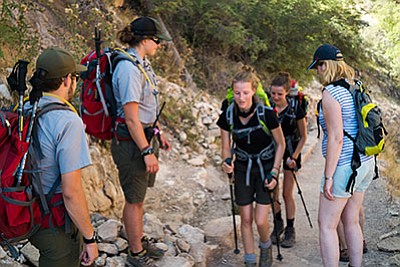 GRAND CANYON, Ariz. - A sign at Grand Canyon, that makes people laugh, reads, 'Going down is optional, coming up is mandatory.'

Whether hikers are laughing from nervousness or from doubt in the sign's truth, is up to the individual, but the fact remains - going into one of the world's most well-known Canyons is not to be taken lightly.

"This is why the Grand Canyon has the busiest PSAR (Preventative Search and Rescue) program, SAR (Search and Rescue) program and EMS program in the National Park Service," said Ben Cooper, PSAR Supervisor at Grand Canyon National Park. "In other parks you hike up in the morning when you're fresh, feeling good and excited and you hike down in the afternoon when you're wiped and tired. Here it's just the opposite. It's reverse mountaineering and there's a different mindset you have to take into your day. The easiest part of the day is the second you step onto the trail here."

To be PSARed is to have a preventative action taken which prevented a hiker(s) from needing a full-fledged rescue. These actions directly alter hiker's plans, providing safe alternatives or decisions which in the end keep hikers and rescuers safe.

"Legally we can't stop people from hiking to the river and back. They are sovereign individuals ... but if we know what they're going to do is probably going to hurt them and potentially others and put rescuers at risk we can certainly have a great conversation with them," Cooper said.

These actions could be as simple as suggesting an alternative route or distance of a planned hike and handing out a package of Fritos. They could also be much more serious, where a PSAR ranger might spend eight hours hiking out with a distressed hiker or providing basic emergency services until a rescue arrives.

Cooper said most conversations on the trail are normally pretty honest and respectful.

"We'll say, 'you have a small water bottle and no food and you plan to hike to the river and back - let's talk' and people are remarkably receptive," he said. "They are really open to listening to a ranger's advice, because we are not here to stop anybody from doing anything. We are here to make people aware and help educate (them) so they feel empowered to make safe decisions themselves."

The Grand Canyon PSAR program was started in 1997 as an effort to reduce the hundreds of heat-related illnesses park visitors were experiencing, including some illnesses which resulted in deaths that could have been avoided with better preparation and planning, according to www.nps.gov. PSAR rangers patrol the upper portions of the main corridor trails, such as the Bright Angel and South Kaibab Trails. Cooper said while people are aware of the dangers of hiking the Canyon, there are still a significant number of people pushing their limits. The idea of getting rangers out on the trails to educate and getting more of a targeted education campaign for backcountry users has become a priority.

"It doesn't matter who you are here. You can be an absolute rock star in the backcountry and you're still going to be that person who needs help if you don't plan your day accordingly," he said.

According to Cooper, the message PSAR rangers want to send to hikers is one of education to prevent self-injury or death.

"I think the general public would like to know that we're working our tails off but it's because we want to help you guys," Cooper said. "This is a really dedicated crew. The park employees and specifically the rangers are an extremely dedicated group of people."

As one of the Seven Natural Wonders of the World and one of the most visited National Parks in U.S., Cooper said it's a mind boggling the number of people who will step onto Grand Canyon's trails every day.

"If you go to the Bright Angel trailhead on Saturday from 7 a.m. to noon you will probably see over 600 people," he said. "That's just the people you'll see on the first mile and a half of the trail until noon or one."

The best advice Cooper and his PSAR rangers and volunteers give is to be prepared, think ahead and plan for your trip.

"Prevention starts with your trip planning," Cooper said. "Check the forecast - that's huge, check on any trail conditions that might directly affect your hike. Read those trailhead signs. Once you've started your trip, bring the right equipment. Bring enough water and food."

However, Cooper recommended not drinking too much water, which could lead to water toxicity known as Hyponatremia.

"More people in the Grand Canyon are hospitalized in the ICU due to Hyponatremia than dehydration," Cooper said. "We can fix dehydration .... but low sodium is very difficult to fix. (Hyponatremia) is losing the balance of food and water."

Because Grand Canyon is a vertical mile deep, Cooper said it is very easy to misgauge or underestimate distances.

"Some people's reference for height range is the Empire State Building, well take three of those and you've gone to Indian Garden (4.5 miles one way down Bright Angel Trail)," he said.

Another serious concern at the Canyon, where temperatures can be 85 degrees Fahrenheit on the rim and 115 degrees at the bottom, is heat related illnesses.

"It's truly a spectrum, on one end you have very minor heat illness where you're a little dehydrated, overexerted yourself in the sun. It can be reversed and fixed quite simply," Cooper said, explaining the degrees of heat exhaustion versus heat stroke. "True heat stroke is a life threatening medical emergency. It's very high mortality rate. Heat stroke has a core body temperature above 104 to 105 degrees Fahrenheit."

Cooper said it is very common for people to have heat illness with a temperature of 99 or 100 degrees Fahrenheit. He said when a person reaches temperatures of 106-107 their brains are overheating and cooking and they could end up going into a coma, having seizures, going into cardiac arrest or dying.

"(Heat stroke) is very difficult to reverse, to fix and so if we can get to them before they get to heat stroke we can absolutely fix that," he said.

Cooper's final words of advice - get out early, avoid the hottest part of the day and remember you're at the Grand Canyon, enjoy it.