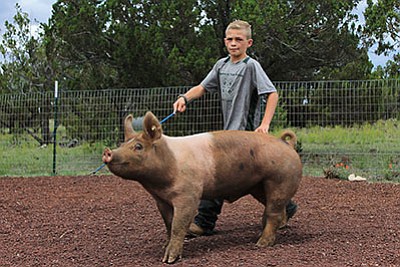 For months, 4-H members in Williams, Parks and Valle have put in countless hours raising market livestock for the fair. Once at the fair, the members will compete against each other for the top place in one of several divisions - steer, hog, lamb, goat, turkey, fryer pen, rabbit fryer pen, and cavie.

Following the judging, many of the exhibitors will auction off their animals to the highest bidders. The auction takes place a 4 p.m. Sept. 3.

Although the fair is in Flagstaff, there are several 4-H groups outside the area that

participate including Parks in the Pines 4-H, Cataract 4-H, and the Williams Mountaineers. Members of the Parks in the Pines and Cataract groups typically raise larger livestock for the fair since many of those members live on ranches or have more acreage for larger animals. The Williams Mountaineers generally raise smaller animals such as rabbits and poultry.

The three groups have historically done very well during the competition at the fair. The majority of the 2015 Grand, Reserve and Showmanship Champions were from the Valle, Parks and Williams areas.

"It costs more to buy one that has been halter broke and is not mean," Kelly said. "$2,500 is minimum for a quality show steer that's not going to hurt the kid trying to walk it."

"There is a lot of cost to the kids as well as a lot of time," Kelly said. "Many kids also attend show camps that give them practice showing the animals."

The members feed, groom and exercise the animals according to 4-H standards. They provide vaccinations and follow strict dietary guidelines.

"Animals raised by these 4-H kids are probably the most well taken care of animals," Kelly said. "They eat the highest quality feed, they don't get any scraps and they're on a strict diet. They're walked, and washed. It's high quality meat."

Members attend monthly meetings to learn about animal anatomy, care and feeding. They also learn how to present their animals.

Kelly's son, Kody, is an eighth grader at Maine Consolidated School and has competed in the Coconino County Fair for the past five years. He has raised five steers and four pigs. His 2015 Reserve Champion win for market pig was the best placing he has done at the fair. He placed third with his steer and won Junior Showmanship for his steer in 2015.

"It's a lot of work, especially with my show steer," Kody said "Before school I was spraying him off getting the hair growing, helping him to look better for the show. It also helps their skin."

Kody struggled this year with a sick steer. He purchased two steers in the fall with plans to raise one for the fair and keep the other one for his family.

"He got pneumonia and I had to give him shots of penicillin," Kody said. "I gave him B-12 to stimulate his appetite."

Kelly said the family spent over $500 in veterinary bills to help the steer. She said Kody worked for months trying to heal the sick steer, but eventually the steer got a twisted stomach and died. The family donated the meat to Bearizona. Kody is now raising the second steer to show at the fair.

Kelly, and other members wanting to raise their livestock to sell, are required to attend quality assurance classes. These classes teach the members how to raise an animal for the market.

Fifth grader and Parks in the Pine 4-H member, Trevor Hausmann plans to compete in his first fair this year with a market hog.

"I feed him in the morning and a night," Hausmann said. "I walk him around and hose him off.

Hausmann said he hopes to sell the hog at the fair auction.

"Unless I get too attached to him," he said.

Members hope the price per pound stays high at the auction to cover the costs associated with tending an animal.

"We usually have a really good pool of buyers, but I don't believe any of them are from Williams," said Laura Kelly, secretary of the Northern Arizona Junior Livestock Association (NAJLA).

Kelly has been working to find livestock buyers from Williams and the surrounding area to attend the auction this year.

"There are a lot of kids from Williams participating," Kelly said.

Kelly wants buyers to know that the purchase of an auction animal encourages 4-H exhibitors to learn and excel in the business of raising and fitting their animals and any proceeds from the sale helps fund future endeavors for those members.

"It's like a summer job for some of them," Kelly said. "They hope to make money and set some aside for next year's animals."

Kody said he is putting money away for college and to purchase a car.

Laura Kelly said there are many options for buyers and sponsors to get involved with 4-H and support the members.

Any individual or business may purchase an animal at the auction if they are the winning bidder. Kelly said there will be 54 pigs and 12 steers at the auction this year. There will also be several lambs and goats.

Kelly said the Grand Champion steer usually sells for $6-8 per pound and an animal is usually around 1300 pounds. Reserve Champion and the other steers usually go for less per pound.

Many business owners and other buyers will do split-buying when purchasing an animal. Groups of business associates, friends or neighbors can divide the cost and then divide the meat among the group.

"A lot of the buyers do that," Kelly said. "For instance the Grand Champion steer was bought by a team of doctors, anesthesiologists, who went in together on the animal and split the meet."

Kelly said there are several tax incentives for buyers since NAJLA is a nonprofit. Buyers can get tax breaks by donating the purchase to NAJLA or a food bank. Some businesses purchase an animal and use it for employee barbecues or send the meat home with employees. Employers also get a lot of advertising with the Fair and NAJLA with the purchase of an animal.

If anyone wants to support 4-H but is not interested in keeping the animal, they can purchase the animal and then donate the animal back for re-sale at the end of the auction. The re-sale value will go to NAJLA to assist in promoting and conducting the auction, support other livestock events and provide scholarships to exhibitors.

Supporters can also just sponsor an exhibitor with add-ons. The add-on money can be any amount and goes directly toward the exhibitor for costs associated with raising an animal.

Anyone interested in purchasing an animal but is unable to attend the Fair can use a proxy buyer or NAJLA representative to bid on their behalf. Buyer pre-registration forms can be found at www.NAJLAsite.org and more information can be found by contacting Kelly at (928) 607-5997.