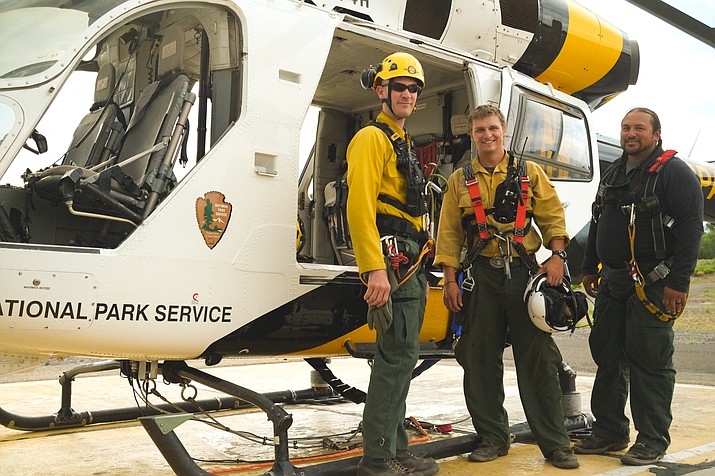 Grand Canyon Helitack is one of the busiest operations in the National Park Service. Crews prepare for short haul training June 22.

GRAND CANYON, Ariz. - Whether it's flying a maintenance crew to repair a break on the Trans-Canyon Pipeline, fighting wildfires across the southwest or launching a full scale search and rescue for missing hikers, river runners or over the edge incidents, the Grand Canyon's Helitack (GCH)crew is never at a loss for something to do.

Grand Canyon National Park's (GCNP) helicopter program is one of the busiest in the National Park Service (NPS).

"(This base) is not the busiest when it comes to number of wildland fires and initial attack but we are the busiest in regards to medical evacuations, SAR evacuations and slinging loads into unique locations," said Matt Walls, assistant helicopter program manager. "On average we fly with both of our helicopters and other helicopters anywhere from six to seven hundred hours per year."

The helitack crew staffs two helicopters. One is contracted to remain in the park and be used for search and rescue (SAR), fighting fires in the Canyon and helping with utility work. The other, for 90 days, starting May 1, is used for interagency fire operations.

As an interagency resource used by federal agencies, including the National Park Service (NPS) and U.S. Forest Service, GCH responds to wildfires across the country.

When the crew is on a fire assignment they are prepared to be out for at least two weeks, with assignments lasting up to 21 days.

When responding to fires, the helitack crew has a multifold mission; flying aerial reconnaissance of the area for fire managers, seeking out and approving helispots, performing aerial ignitions through the use of plastic sphere dispensers (PSD) to create fire lines, responding to medical emergencies and transporting ground crews and fire managers. Crew members are trained firefighters and many, if not all crew members are certified EMTs. As firefighters in aviation the NPS helitack is also trained in short haul operations to support search and rescue missions.

To ensure their responsibility to Grand Canyon remains a priority, crew members are rotated between responding to fires and working the Canyon operation. Five to seven people are on the road while two to six people remain at the Grand Canyon Helibase. Grand Canyon's aviation department also works closely with other national and state agencies to ensure adequate coverage for the park and fighting wildfires.

When a break in the Trans-Canyon Pipeline (TCP) and a water pump at Indian Garden on the Bright Angel Trail forced the park service to go into immediate water conservation on the South Rim earlier this summer, the helitack crew was called on to sling in equipment and manpower to fix the problem.

"We flew a crew of four people in and then three different sling loads of tools and equipment so they could begin excavating it and cutting the pipe out," Walls said.

The helitack crew helps with mulitple utility projects in the inner-Canyon and on the Canyon rims.

When hikers are reported missing, the helitack crew flies search crews out to look for the individual(s) and help with aerial searches.

"People don't take into account that this is like an inverted mountain," he said. "You go down first but you still have to go up to get out."

During the hotter summer months Walls said heat related issues are a common call for help. Most calls come out of the Canyon corridor - the Bright Angel, South Kaibab and North Kaibab Trails where the majority of Grand Canyon hiking takes place. Another common call for help comes from people rafting the Colorado River through the Canyon.

"Last week we had a guy who dislocated his jaw while on a river trip," Walls said. "We get all those reports via satellite phones and it goes to the SAR shift ranger."

Seven days a week, 365 days a year a ranger, typically from the Canyon district, is the SAR shift ranger. This ranger is the main point of contact with all parties reporting incidents and requesting assistance. The shift ranger then calls the helibase and gets a paramedic or flight medic to the base where the helitack crew will put on their equipment and brief with the paramedic and shift ranger on the location of the incident and complete a GAR (green, amber, red) safety risk assessment before deploying on the mission.

GAR assessments are conducted by the NPS as an operational leadership program to assess the strengths of the team and the risks involved in taking the mission.

With red being high risk, yellow marking middle of the road and green being good, the assessment factors in a number of key points; supervision, planning, team selection, team fitness, communication, contingency resources to the environment and incident complexity. The self assessment asks those involved in the mission to rate each of the categories on a scale from one to 10.

"Some things that are always high here is environment - it's the Grand Canyon, it's hot, the weather is constantly changing, maybe it's the time of day - we can't fly before sunrise or after sunset, so we adjust and figure out a way to do that mission. Maybe it's something along the lines of getting a helicopter that can fly at night, like DPS, to go in," Walls said.

The helitack crews are considered part of SAR at Grand Canyon. Walls said during the summer the park can average one medivac per day.

"There might be a day where we don't have any and then there was a day when we had four in one day," he said. "That could be a guy on a river trip breaking an ankle, heat exhaustion, maybe people over their heads in the backcountry. We get a lot more personal locator beacons - people hitting those beacons and we may not know what it is but since they did that we have to go and find out."

Recently the GC crew assisted the U.S. Forest Service in getting their helitack crews up to speed on short haul.

"They've been using that as a means of extraction of firefighters on the fire line," Walls said. "We've been trainers for them in the last year or two."

Walls said the helitack crew at Grand Canyon has a wide variety of skills and talent that is used by highly qualified and trained professionals to do the best job they can for each function of the helitack operation.

"As far as helitack crews, the park service is unique in natural resource agencies as far as the SAR function," he said. "Grand Canyon's crew is very unique from other helitack crews which solely focus on wildland fire. We focus on (wildland fire) but there are a lot of other areas we focus on too. It is unique. It's also a unique crew to work with and a unique experience to have."