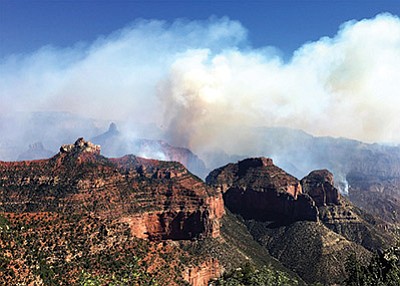 In July, a temporary flight restriction (TFR) was put in place for airspace surrounding the Fuller Fire on the North Rim of Grand Canyon. TFR’s restrict aircraft operations within designated areas in order to protect aerial firefighting operations. Photo/NPS

GRAND CANYON - NORTH RIM, Ariz. - While fighting wildfires every precaution is taken to make sure firefighting crews are safe and effective.

Which is one reason temporary flight restrictions (TFR) are established - to keep private, commercial and aerial firefighters safe when wildfires are present.

On July 16 while flying the Fuller Fire on the North Rim of Grand Canyon National Park (GCNP), an Air Attack pilot noticed an aircraft approaching the TFR established in the airspace above the fire. The unidentified plane came within 100 feet of the firefighting plane before flying away.

When incidents like this happen an Aviation Safety Communique (SAFECOM) is filed, which fulfills requirements for aviation mishap reporting for the Department of Interior agencies and the U.S. Forest Service. The system uses the SAFECOM form to report any condition, observation, act, maintenance problem or circumstance - including flying in a TFR zone, where personnel or the aircraft has the potential to cause an aviation-related mishap, according to safecom.gov.

Submitting a SAFECOM is not meant for retaliation or immediate correction. Rather, it is a tool agencies use to identify, document, track and correct safety issues.

Justin Jager, Interagency Aviation Officer for GCNP, Kaibab and Coconino National Forests, Flagstaff and the Verde Valley area National Monuments said the key to SAFECOM reports is that they are non - punitive and are used as a learning tool.

"We are a learning organization. We like to learn from our mistakes," he said.

When looking at SAFECOMs, aviation managers look for trends and work with the company or the FAA (Federal Aviation Administration) to address issues before they can turn into bigger safety issues.

When a TFR is issued the FAA will close down the designated airspace for other users. Jager said TFR's are used for aviation safety and are important for aerial firefighting safety.

When the aircraft flew into the TFR established over the Fuller Fire, it could have had serious repercussions - like a mid-air collision.

According to the SAFECOM, the aircraft approached the southwest flank of the fire and continued in an east then southeast direction following the fire`s edge.

The report stated, 'the Air Attack followed while attempting to contact them on the TFR and Air Guard frequencies. They never responded. The aircraft then flew out of the TFR in a southeast direction....at the time of intrusion there were no other fixed wing operations, but helicopter operations were being conducted at 9,500 feet and below on the northwest side of the fire. The helicopter pilot was notified as well as Operations, Air Operations and the Forest Aviation Officer.'

According to the report, the aircraft was not a tour operator.

The report went on to say that the air space in this area (over the Canyon) is very complex because of multiple commercial tour routes, restricted areas, no fly zones and corridor routes.

Establishing a TFR in already complex airspace adds to the complexity. Jager said it is up to pilots to be aware of TFR's and said if an aircraft flies into a TFR it causes firefighting operations to be put on hold and can be extremely dangerous for all aircraft involved.

"They flew into the airspace there and came within 100 feet of our Air Attack platform, with two airplanes in the air - 100 feet is nothing. It is very close," Jager said. "When we have intrusions like that we're going to shut down aviation operations. If we don't have communication with them - don't know what they're doing. it's obviously a potential hazard of running into an air tanker or helicopter or something else."

Jager said shutting down aviation operations can and does impact firefighting efforts.

"We are going to shut down aviation operations for the safety of our aerial firefighters. That can have a lot of different effects on the fire if we're actively trying to put down retardant or water with buckets."

When TFR intrusions occur, agencies work with the FAA to bring appropriate corrective actions against the perpetrator.