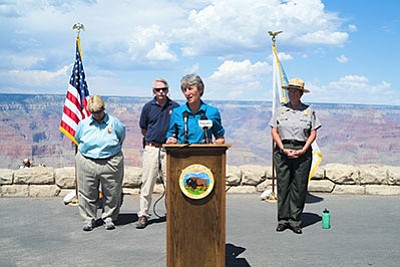 GRAND CANYON, ARIZ. - U.S. Secretary of the Interior Sally Jewell visited the park July 26 and addressed sexual harrassment on the river and possible designation of a Grand Canyon Watershed National Monument among other topics.

Jewell was joined at Hopi Point on the South Rim by NPS Director Jon Jarvis, NPS Regional Director of the Intermountain Region Sue Masica and Lehnertz.

"I am very proud of the work that the employees do. I thank the humbling experience they've had through the unwanted visibility but important visibility around sexual harassment is going to make the Department of Interior stronger, the National Park Service stronger and frankly it's going to press a reset button on Grand Canyon National Park where this is going to be one of the best places to work in the future," Jewell said. "I couldn't be more proud of who we're going to have running this park than Chris Lehnertz."

Lehnertz has worked in government organizations including the Environmental Protection Agency (EPA), the U.S. Forest Service and regional leadership with the NPS. She is a trained environmental biologist who has been with the NPS for nine years. Lehnertz is the first woman to hold each of the four leadership positions she's been in, including the job she is leaving as superintendent overseeing Golden Gate National Recreation Area in California. Lehnertz said in a press release that her top priorities were employee safety and creating an inclusive work environment.

"I want to make sure that everybody knows that Grand Canyon is a place that will lead the National Park Service through making sure our organization and this park are inclusive, respectful and embrace diversity," Lehnertz said.

In January, an investigative report came out after a Sept. 2014 letter addressed to Jewell from 13 former and current NPS employees claimed sexual harassment and misconduct on the Colorado River by coworkers and supervisors. The employees worked on the River District and said sexual misconduct had been going on for over 15 years. NPS dismantled the river district in April as part of a series of reforms outlined in response to the report. The river district was responsible for law enforcement and emergency-services on the Colorado River corridor through Grand Canyon and was responsible for managing NPS river trips.

Following the report, former superintendent Uberuaga promised changes and a zero tolerance for any hostile work environments in the Canyon. Jewell said zero tolerance might be impossible but making sure people feel safe and can communicate without the fear of retaliation or losing their jobs is the first step toward moving forward.

"Zero tolerance may not be realistic. It's how you deal with it," she said. "There are a number of lessons we have learned through the situation at the Grand Canyon that will make the DOI stronger."

Jewell said NPS and Grand Canyon are not the only federal agencies that have had to deal with these issues.

According to Jewell, some things that need to take place are consistency in taking action, ensuring there is a safe place to go outside the changed of command and keeping good data on the working environment people are experiencing.

"The goal is to make sure that the reporting and the prevalence comes together because people are reporting because they feel it's safe," Jewell said.

Jarvis said in many ways the report about the Canyon incidents was a gift, allowing action to be taken to address it throughout the park service. Besides consulting other agencies dealing with similar issues, Jarvis said the NPS is establishing what it means by zero tolerance and is working toward understanding the basis of sexual harassment in the workplace and how prevalent it is in the park service.

"Frankly, we do not know, because based on other agency experiences, the reporting is only the tip of the iceberg. We want to be able to compare prevalence to the level of reporting and then bring those two together," Jarvis said. "That prevalence survey needs to be done every couple of years. It's not like we do it in one shot and then consider ourselves done."

Establishing an NPS team and creating a hotline for reporting harassment are other avenues NPS plans to use to address the issue.

Additionally, Jewell spoke about the possible designation of a 1.7 million acre Grand Canyon Watershed National Monument. Jewell said her experiences and work in Bluff, Utah, where she spent four days meeting with three different county councils, tribal communities and business owners to hear concerns and support for a possible designation of the Bears Ears National Monument, indicates her commitment to listen to different points of view before any action to designate or not either the Bears Ears or Grand Canyon Watershed as national monuments.

"We have listened in this administration to different points of view," Jewell said. "We have also allowed the legislative process to work itself through but there are times when we've needed to move and we've been very judicious in doing that."

Jewell said the Antiquities Act, which allows President Barack Obama to designate national monument before he leaves office, is an important tool used by presidents but said legislation is also an important tool

"In the case of the greater Grand Canyon area there is both a legislative proposal for additional protections (and) there are people that are asking for monuments - we have not held any public meetings," she said.

During her visit Jewell met with over 300 park employees, speaking to them about moving past the recent sexual harassment and hostile work environment scandal and officially introduced Lehnertz as park superintendent.