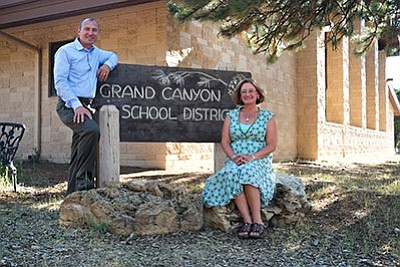 Grand Canyon School heads into 2016 -2017 school year with Matt Yost as assistant to the superintendent and Lori Rommel as assistant principal. Loretta Yerian/WGCN

This year the school begins the year with an all-time low in staff turnover, two new administrators promoted within the school and moving forward with implementing the Beyond Textbooks curriculum.

After replacing almost a third of the staff in the 2014-2015 school year and losing a principal halfway through the school year, GCS administration decided it was time to implement changes in school leadership.

In January, Tom Rowland was promoted from assistant principal to principal after former GCS principal, Javier Abrego, took a leave of absence and was not able to finish the school year. At that time Rowland looked internally and began mentoring Lori Rommel and Matt Yost for future administrative positions at the school.

Both Rommel and Yost have taught and worked in a variety of positions at the school. They have served as curriculum coordinator and CTE instructor and have sponsored school trips, student council and graduating classes.

"I needed help and I picked two people who I thought had great promise and were a bright light on this campus and had the pizzazz to be excellent school administrators," Rowland said.

Yost and Rommel said they knew early on they would be stepping into new positions for the 2016-2017 school year.

"We knew it was going to be happening this year, (school administration) had conversations with us throughout last year," Yost said.

In May, after school was released for the summer, school administration designated what positions Yost and Rommel would be assuming in August.

Rommel is the new assistant principal and Yost is assistant to Shonny Bria, superintendent of GCS. This will be Bria's third year as superintendent at the school. Rommel and Yost are currently working toward administrative certifications and have mentored under Rowland.

"We had both been mentoring under Tom, throughout the year," Yost said. "When they opened the opportunity and said they wanted to raise administrators from within both Lori and I jumped at it."

Rommel said she was able to step more fully into the role after her freshman English class were taken from her. At that time, she began assisting Rowland on a daily basis.

"Last year I felt like I was truly an assistant to Tom," she said. "Every day it was Tom saying, 'Lori come see me, Lori I want you to see this, I want you to experience this, you're going to help me with this - I did whatever Tom asked me to do."

Rommel also visited Morenci Unified School District for two days to see the impact and how school administrators work at other schools.

"I got to see what a functioning school looks like and it was very inspiring," Rommel said. "That was a school of 600 and it was just her (the principal) and an assistant. It was amazing."

By March, Rowland asked Rommel for a commitment. Similarly, Rowland approached Yost and began mentoring him.

"He saw the different hats I was wearing and said, 'you need to get into a leadership position,'" Yost said. "So I started going to school real quick and for me it was the same thing - walk throughs, my phone buzzing all the time with Tom saying, 'you need to get over here.'"

Rowland had Yost and Rommel sit in on observations and disciplinary procedures and showed them how to work with parents, how to effectively counsel and how to work with the school board and the superintendent in addition to other daily administrative duties.

New and old administration agree the school's goal is working toward continued improvement throughout the school and moving toward becoming a professional learning community. They plan to accomplish these goals though the continued use of the Beyond Textbook curriculum and effective leadership.

In 2015, the school brought in Beyond Textbooks to improve the quality of learning and student achievement. Over the course of last year, teachers were instructed in how to teach the curriculum effectively and students worked to improve math, reading, writing and science skills.

One long-term goal of the school is to become the number one school district in the state.

The 2015-2016 AzMerit scores have been released to parents but are not available to the public at this time.

"We plan to continue our growth. We plan to continue make this place stable. Last year on this date we had around a third of the staff that was new. This year we have three new people and they were (replacing teachers) who transferred," he said.

Other changes at GCS

Additionally, GCS is implementing a state policy for required days of absence students can miss each year.

"We had a little better attendance last year," Rowland said. "We are implementing a state policy that after 10 absences a semester a student will lose their credits. We can't educate a child if they are sitting at home."