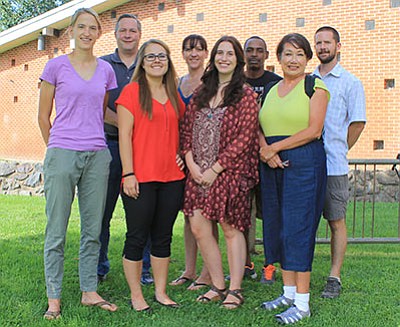 WILLIAMS, Ariz. - With the carefree days of summer over, several hundred students in Williams are headed back to school Aug. 3 where they will meet new teachers and hear about new goals for the 2016-2017 school year.

Williams Elementary-Middle School Principal Carissa Morrison, in her second year at the helm of the school, and her staff have looked back on last year's gains and have created a blueprint for the new year.

This year, staff plans to integrate a period of sustained silent reading, incorporate differentiated instruction into the classroom, emphasize the importance of regular attendance and improve on the re-teach and enrich classes that began last year.

"We saw some really good growth last year and we're improving upon it for this year," Morrison said.

Morrison is excited about creating a time dedicated to sustained silent reading this year. She said staff trimmed a few minutes from each class period to build a 20-minute block for reading for the students. The class will be right after lunch and will be a time for free reading where a student can pick any piece of literature of their choice.

"We bought some books this summer or they can bring what they want from home," Morrison said. "I have newspapers, books, magazines, comic books, even Sports Illustrated for Kids. You can read whatever you want."

Morrison has a special interest in the new reading program.

"I'm very passionate about this," she said.

While a Language Arts teacher in Seligman, Morrison did her own research with her high school students on a silent reading program 2009-2011 and found the students made gains in increased comprehension, fluency and vocabulary.

Morrison's students were given 15-20 minutes, two to three times per week to read. Initially there was a mix of student responses. Already avid readers quickly took to the routine, however others needed more teacher direction and supervision. By the end of the year the majority of the students were engaged and reading diligently. There was marked improvement in students' reading habits and attitudes. She found that students' appetites for books were growing and the AIMS reading scores showed improvement. They had increased from 50 percent passing in 2009 to 76 percent passing in 2011.

Other studies support what Morrison found in her research. A 2007 National Endowment for the Arts study touted the benefits of free voluntary reading noting that reading test scores declined and academic disciplines like math and science dipped for students with limited access to books.

Morrison said the elementary school will do their own version of sustained silent reading as the teachers work to find ways to incorporate it into their classrooms.

Morrison is hoping that by giving students the freedom to choose what they read, they will learn to enjoy it and spend more time on their own reading.

Morrison said society has so many distractions today, that children are spending less time reading on their own.

"There are so many competing interests at home...babysitting, video games, work, it may not happen at home," she said.

Morrison said the school is going to also focus on differentiated instruction in the classrooms this school year. She said the school received Title I funding this year that has been used to purchase Achieve 3000 software to assist with their goals.

According to Morrison, differentiated instruction consists of the efforts of teachers to respond to differences among learners in the classroom.

"We are trying to meet students where they're at and help them get to the next level," she said.

Morrison said the new software will help with differentiated instruction by providing reading materials of varying levels on the same topic.

"So for example, if a class is study astronauts, the software will generate the same article with different Lexile (reading) levels that vary sentence structure, syntax and vocabulary depending on the capability of the student," she said.

Morrison said the software will help struggling students so they won't be left out of the instructional picture and help higher achieving students progress at their level.

She said the reteach portion of the program was especially beneficial last year and the staff is working to make the enrich portion follow more closely with the state standards.