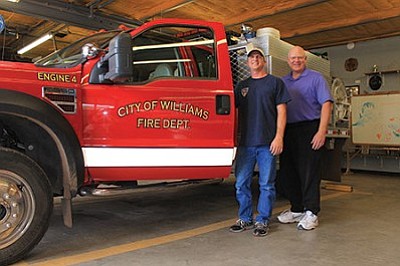 WILLIAMS, Ariz. - They are our first line of defense for many types of emergencies. When there is a fire, emergency medical incident, vehicle accident, hazardous materials incident or a downed power line, they are often the first ones to the scene.

The Williams Fire Department has the responsibility to protect the community in these situations, yet the department is at an all-time low in members with just 18 firefighters.

"We always have ebbs and flows in our membership, but we've stayed at a lower level for a longer period of time," said Williams Fire Chief Chase Pearson.

Pearson said the reduction of firefighters is not specific to just Williams. Nationwide, the number of volunteer firefighters has dropped significantly.

According to the National Volunteer Fire Council (NVFC), the number of volunteer firefighters has declined by about 12 percent since 1984. The four major factors contributing to the decline include increased time demands, more rigorous training requirements, and the proliferation of two-income families who do not have time to volunteer.

Pearson said Williams Fire has the highest call volume in the middle of the day in the middle of week. He said that is the hardest time to find firefighters to show up since most have jobs that require them to be present mid-week.

Pearson said the way to ensure there are enough fire fighters to respond during those times is by having more volunteers available.

"We've been working with employers so they understand what we're doing so if they're (fire fighters) available they can respond from work and head straight back," Pearson said

Pearson said fewer volunteers adds more stress to the current firefighters. He said the small number of firefighters are stretched thin and are asked to respond to more incidents and participate in more events.

"Call volume is only one part of the fire department," Pearson said. "There are so many things that we do during the week."

Pearson said the department responds to approximately 130 emergency calls per year. The firefighters also spend several hours per week with station duties, which include checking to ensure the 10 fire trucks are ready to respond.

The department also participates in many community events and fire prevention programs. Pearson said it is more difficult for the department to participate in these events with lower numbers of volunteers.

"Besides a slower response to calls, our fire prevention activities go down, we don't get into the schools, we don't get to change people's smoke detectors," Pearson said when asked what effect lower numbers of firefighters will mean to the community. "We like to volunteer all over in the city, we want to be a part of that," Pearson said.

Firefighter John Moede is developing a recruitment plan to find and maintain fire fighters in the department. He said having the department involved with activities and events in the community also helps with recruiting.

"It's a different game here in Williams," Moede said.

Moede is a retired fire fighter from the city of Los Angeles. He also served as the emergency manager for the city of Scottsdale prior to moving to Williams.

"The target audience we are looking for is young men and women," Moede said. "They are transient in nature, we need to give them good skills and get good production from them with the short time we have them."

Pearson said it can be expensive to train volunteers. He said most new fire fighters need several hundred hours of training.

"We try to get a group of people for a training," Pearson said. "Once its complete you hope you wind up with the amount you started with, but if not at least you had a big enough group to make it worth it."

Pearson said the department can take volunteers as young as 16 years old. He said from 16 to 18 years old, firefighters can do limited chores with the department through the cadet program.

Pearson said the fire department offers many opportunities for new recruits. He said it is a perfect opportunity to receive training that will increase the likelihood of being offered a full-time firefighter job. He said those positions are very competitive and gaining volunteer experience as well as certain firefighter certifications can boost a candidates chances of being offered a job whether it's with a city department or a wildland fire unit.

"Certain fire departments will put you through their own fire academies," Pearson said. "But other departments will accept the state certification you can get through Williams (Fire Department)."

Pearson said there are many highly desirable skills that can be gained through volunteering. He said it is an opportunity learn if this is something a person wants as a career or just a way to serve the community.

"You'll see things like leadership, teamwork and working under pressure," Moede said. "Being able to fit into an organization, understand rules and responsibilities, working together as a team...that's what every employer looks for."