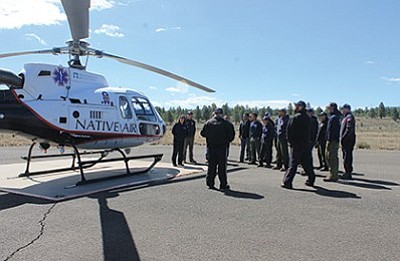 These hazards and other issues were brought to the attention of dozens of volunteer and paid firefighters who gathered for a multi-agency emergency response exercise at Pittman Valley Helibase April 23.

Dozens of firefighters from rural fire districts near Williams received instruction from pilots, flight paramedics and flight nurses with Guardian Air and Native Air on the use of medical helicopters during emergency medical evacuations.

Attendees learned how to create a landing zone, how to determine hazards, how to package and load a patient, and what to do and not do around a helicopter.

"This type of preparedness training is critical to increase readiness and interoperability of local emergency responders in the event of a real life incident," said Jim Burton, assistant fire management officer of the Williams Ranger District of Kaibab National Forest.

The group meets once a month for training and discussion about wildland fire and emergency response situations.

"We used to live in our own fire districts and only deal with what we had to deal with," said Deidre McLaughlin, a Sherwood Forest firefighter. "After 9/11, you can't do that anymore. The world's outgrown us and now we have to interact. Instead of doing it by ourselves, we can work together as a group to meet all the emerging needs."

McLaughlin said members of WFAB are working on making the fire districts more cohesive. Their most recent push is to create a region wide communication system which includes installing a new repeater on Bill Williams Mountain.

"We're loosely calling it the Northern Arizona Fire Authority, but it's not formally organized yet," McLaughlin said.

"For example, if High Country has an incident and something happens and all their people are busy, they'll ask us if we can cover for them," she said. "We'll put our guys on standby and if anything else happens in their fire district we will back them up."

"We though with a large group it would be great to bring in both agencies (medical helicopters)," Trotter said. "We like getting the crews' input and the pilots' input. It's a joint effort to get some training for the new guys and some review for the guys that have been around a while."

Guardian Air is owned by Northern Arizona Healthcare and has six helicopter bases in different locations around northern Arizona. The helicopter crew at the training is based out of Cottonwood. Native Air is owned by Air Methods and is contracted by Yavapai Regional Medical Center. Both Guardian Air and Native Air flight nurses and paramedics transport critically ill and injured patients around the state, while providing lifesaving care along the way.

"We have all of our equipment here," said Erin Davidson, flight paramedic with Native Air, to the trainees. "It's sort of like a mini ER."

"If they have a femur fracture and you put a Hare Traction on them, we can't fit them," she said. "But if you put a Sager Splint on we can do that. Childbirth is kind of iffy. We don't do codes unless we need to keep working it."

Pilot Ed Hansen has worked in emergency services for over 30 years. He began as an Army pilot and then worked 26 years as a Coast Guard pilot before coming to Native Air. He has been with Native Air for eight years.

Hansen said he appreciates the support that ground crews give the helicopter.

"We're perfectly capable of going in by ourselves if we have to," Hansen said. "But it's nice to have someone on the ground to give you an idea of what you are dealing with."

Although a Native Air helicopter crashed and two employees were killed in December of 2015, Hansen said medical helicopter transport is much safer now with new Federal Aviation Administration mandates. He said helicopters are now equipped with radar altimeters, terrain alerts, and night vision.

"The biggest hazards here are trees and hills," Hansen said. "We fly now with night vision, so we're a lot safer at night. Search lights aren't as great as you think they are."

Ray Hicks, a flight paramedic with Guardian Air, said first responders on the ground help make the scene much safer for responders.

"They do all the work really," Hicks said. "Sometimes we'll show up and have to do some interventions, but then we're just high speed, get them to the hospital and keep them alive."

Hicks said it is more stressful for the flight crew when there are no trained first responders on the ground prior to the helicopter's arrival. He said he appreciates the time the volunteers spend learning how to help medical helicopters.

"It's refreshing to everyone," Hicks said. "They (the firefighters) know we're coming and what to expect and we know they're there and have everything under control and it will be cool when we land."