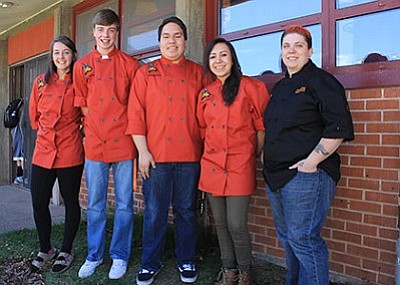 Junior Eric Belmontes placed second in the culinary competition with his recipe for sautéed chicken in a mushroom pan sauce with a sautéed green vegetable, glazed carrots and rice pilaf. He was awarded a $12,000 scholarship to the New England Culinary Institute in Vermont, and a $2,000 scholarship to the Culinary Institute of America in New York (CIA).

Rheanon Koss placed third in the baking competition with her rendition of a braided loaf, knot rolls, pumpkin bread, 24 sugar cookies and a decorated wedding cake. She was awarded a $9,000 scholarship to the New England Culinary Institute in Vermont, and a $1,000 scholarship to CIA.

The SkillsUSA Arizona Championships is a showcase for Arizona's trade, technology and service high school and college students. The annual conference features 70 skill and leadership competitions that determine who will represent Arizona at the national SkillsUSA Championships.

Employers, experts from industry and educators work together to design, judge and recognize members for their accomplishments in competitions that have real-world challenges. Contestants use math, science, reading and language skills in conjunction with hands-on technical skills to compete against other students throughout Arizona.

Williams High School culinary teacher Jackie Carlile prepared the students for more than a month for the competition. The students met on Fridays to refine their skills and recipes.

Gonzales, Heap and Belmontes competed in the culinary competition, while Koss participated in the baking competition.

"They tell you what to cook, but you have to find a recipe and practice and perfect it," Heap said.

Heap said they were told to prepare a sautéed chicken recipe and it was up to the students to find the spices and extras to refine it.

The 42 students from various schools were given three hours to prepare the meal for the competition.

"We practiced beforehand so we knew how to cook and present the meal," Belmontes said. "But the elevation change was a lot, so that made it more difficult to get everything cooked in time."

The students were judged on more than just the taste of the meal. The judges looked at cleanliness, organization, communication and cutting skills.

"You watch it on TV and you say that's easy," Koss said. "It's not easy, it's stressful. I used my inhaler like four times. I was really stressed out."

Koss competed with 16 other students. Each student followed defined recipes for the baking competition.

"Mine was very specific, we want this kind of bread, these kinds of rolls, this kind of cake," Koss said. "I had no freedom to do what I want."

Carlile said the cooking competition also has a service category and a knowledge bowl. She hopes to bring more students next year for those competitions. She said the students worked hard in preparation for this year's event and were nervous before the competition.

"Eric wasn't stressed at all though," Carlile said. "He stressed me out. He was helping other people, sharing his plates."

Prior to the competition, the students took a test on their cooking skills.

"It was about culinary knowledge around the kitchen," Heap said. "Like what kind of hook you would use for bread. What temperature a chicken should be when fully cooked."

"Just the basics, like conversions from pounds to ounces, simple stuff," Belmontes said.

Of the four students, Heap is the only senior graduating in May. He said he doesn't plan to pursue a career in culinary, but is grateful for the skills he gained in the class.

"The skills were definitely useful for cooking at home," Heap said. "But there was a lot of other stuff like working under pressure, working around people and managing your time that I took away more than anything."

Belmontes and Koss have one more year of school before graduating in 2017. Koss is uncertain of her future plans but Belmontes thinks he will pursue a cooking career in the future.

"It's kind of a relief knowing that you have something to look forward to," Belmontes said of his scholarship.

Gonzales is unsure of her future plans but know she has gained a lot in the class too.

"If I ever have a family, just knowing how to cook and knowing those skills to actually cook something besides ramen is good," she said.