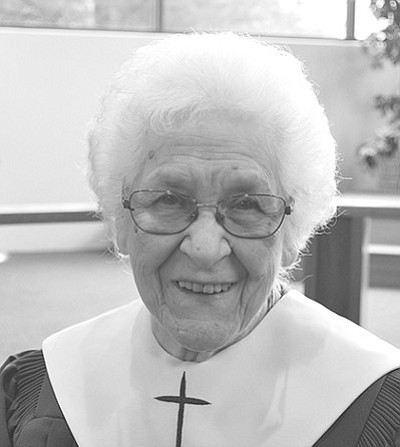 Lorraine loved singing and even sang with her sister, Gloria, on a radio program while growing up in Bisbee. She then attended Arizona State College in Tempe where she met and married Gilmer "Bud" Godbold and settled in Phoenix. There she continued singing and playing organ for Garfield and then Bethel United Methodist churches while raising her family.

She worked for United Way and later for Mountain Bell and then retired to Williams, Arizona where she continued singing and playing organ for the Williams United Methodist church.

Her last move was to Cottonwood, Arizona where at Cottonwood Village she played piano and sang for singalongs. While playing and singing for her own pleasure in the auditorium she would have residents and employees stop to enjoy listening to her. She was just starting to sing with the choir at Sedona United Methodist Church when her health started restricting her travels.

Lorraine was preceded in death by her beloved husband of 69 years, Bud, her parents, her sister Gloria Martin, and brother Charles "Butch." She is survived by her son Kenneth (Susan), daughter Roxanna (Don) Overbee, five grandchildren and five great-grandchildren.

A memorial service will be held at 11:30 a.m. at the Prescott Fort Whipple VA Chapel on Monday, April 25th at 500 N. Hwy 89 in Prescott. Interment and reception following.