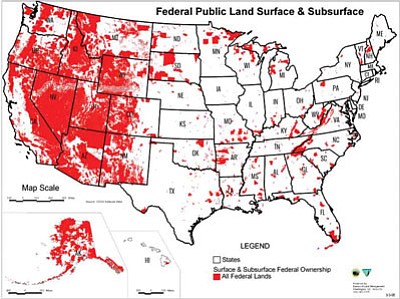 TUSAYAN, Ariz. - In a public session put on by Congressman Paul Gosar, R-Prescott, the town of Tusayan was among multiple public and private entities that said they strongly opposed the establishment of a Grand Canyon Watershed Monument.

Small business owners, sportsmen, farmers, ranchers, elected officials and stakeholders joined Tusayan during the public session and said a designation of this size(1.7 million acres) would cause significant harm to the economy and would kill thousands of local jobs.

Tusayan Town Manager Eric Duthie said the creation of the monument is a federal overreach to appease special interest groups and does not represent the views of residents who live at and help manage the Canyon.

"This monument is an underhanded way to achieve special interest goals, that can't be achieved any other way," Duthie wrote in a written testimony the town submitted for the public listening session titled, "Government Land Grabs: Exposing The Truth" held in Kingman April 11.

During the event Gosar heard from concerned citizens for more than three hours on the need to reform the Antiquities Act and the negative impacts that would result should President Barack Obama designate the proposed monument through the use of the Antiquities Act.

"Stakeholders made (it) clear that Arizonans adamantly oppose another massive land grab from the Obama Administration," Gosar said. "Witnesses at this event were unanimous in rejecting use of the Antiquities Act to create a new 1.7 million acre national monument in a watershed in northern Arizona. Substantive testimony confirmed that this misguided special-interest proposal will kill jobs, prevent mining, retire grazing permits, close roads to OHV users, reduce access for sportsmen, steal water rights and harm 4FRI (Four Forest Restoration Initiative). I call on the White House to listen to the people of Arizona and reject this misguided land grab put forth by environmental extremists with an agenda."

Central to the issue is Obama's use of the 110-year-old federal Antiquities Act, which he used to make the designation that now awaits congressional approval. Last summer, the House passed Gosar's resolution to challenge the designation and it is now up to the Senate to take action.

Those who spoke against the designation represent the industries and recreational pursuits that will likely be most affected if the designation is made. They fear it will restrict access to the land and ultimately ban mining, ranching and energy production and transmission. Critics also include logging interests, hunters and fishers, campers, hikers and mountain bikers.

The monument would encompass all of the north Kaibab and Tusayan ranger districts of the Kaibab National Forest, as well as lands on the Arizona Strip north of the Colorado River. All lands already are managed by the federal Bureau of Land Management or U.S. Forest Service, and the Arizona Game and Fish Department works in collaboration with its federal counterparts in managing wildlife. A significant percentage of the land in question is located in Mohave County.

• Arizona is home to 18 national parks or monuments, nearly 20 percent of the almost 100 such sites in the U.S.

• The Antiquities Act requires the federal government to take the smallest amount of land possible that is needed to protect the cultural artifacts for which the monument is designated. Critics contend 1.7 million acres is excessive. It also was noted that national monuments east of Colorado are much smaller because the amount of public lands in that half of the country is much lower.

Gosar's main objective is to block presidential abuse of the Antiquities Act.

• Lawsuits from Western states are a foregone conclusion. Utah has already filed a lawsuit against the federal government and Arizona could become a co-plaintiff, according to House Speaker David Gowan, R-Sierra Vista. Still other states might join in, as the 11 western states continue to push back on what some consider pervasive federal overreach.

Because those properties are surrounded by federal land, they are subject to federal regulations. Gosar said this constitutes an unlawful taking, particularly since these owners have not received just compensation for land they likely won't ever be able to sell once the designation is made.

While proponents say property rights will not be affected, some claim the federal government put a meter on a private property's well after it was learned the water used came from under a national monument in Utah.

But critics claim those rights are always limited by environmental impact studies that take on average four years to complete - after an area has been designated a national monument.

Perhaps the most forceful comments came from Kurt Davis, of the state's Fish and Game department.

Davis noted the land surrounding the proposed monument is already under federal control, and in total that land is more than 6 million acres out of a total of 10.3 million acres in the state.

"It's nearly the size of Maryland," said Davis, adding the land is currently managed for multiple use. Should the Watershed Monument come into law, Davis said the federal government would make policy on wildlife management and all other uses, taking complete control from the state and "impeding Game and Fish's ability to fulfill its mission. They'll slowly choke out multiple use, and they'll also keep the water, either by presidential fiat or congressional approval."

Critics also noted the federal park system is a stunning $11.9 billion behind on deferred maintenance costs already, so it makes little sense to add another 1.7 million acres to the system.

Davis said it isn't uncommon for restrictions to national monuments to be implemented, ranging from arbitrary road closures to bans on target shooting, a pastime that goes back to Arizona's territorial days.

Critics contend the designation flies against provisions in the federal Multiple Use Doctrine that governs public land use. Simply put, the doctrine calls for the government to provide the broadest use possible, both for private pursuits and industry for the best benefit to the public.

That includes making room for Arizona's multi-million dollar hard rock mining industry, and especially its uranium mining, which has been severely limited since 2012, when a 20-year moratorium of mining the mineral within 100 miles of the Grand Canyon was put into effect.

Indeed, proponents claim the designation is needed to not only protect Native American cultural artifacts - people have lived in the region for 12,000 years - but also to protect the water basin.

Critics cry foul, saying neither tribes nor water advocates spearheaded the push for the designation. Rather, "extreme environmental groups" such as the Sierra Club are behind the movement, according to Mohave County Supervisor Gary Watson.

Obama also was criticized. Critics said the more than 2 million acres he has set aside is the most of any president, and that he is doing so as a means to build a legacy, not out of concern for protecting wilderness.

Duthie said the designation would swallow the town of Tusayan and was a unilateral means to obligate one party. In April 2015, the Tusayan Town Council officially opposed the creation of the monument through congressional decree or Executive Order.

"Tusayan believes such action would constitute federal overreach in order to appease special-interest groups who do not live among, nor represent the views of the many life-long residents who cherish and manage the Grand Canyon," he said.

One example used by the town in its written testimony was recently retired former Mayor Greg Bryan who lived and worked in Tusayan for more than 17 years. Bryan retired in December 2015 but was forced to move out of Tusayan since no private housing exists.

"Upon retirement, he was forced to move from the town he helped create, since no private owned housing exists," Duthie wrote. "No private housing exists because the Forest Service refused to allow the town to improve an existing road to town property where affordable homes can still be built."

Duthie said Tusayan would become the only municipality entirely swallowed up in this monument and said private and municipal property would be unwillingly placed under an advisory committee to determine land management doesn't matter in unilateral decisions."

Duthie said potential members of an advisory committee are already expressing how they will finally be able to push their agendas without interference from people living within the monument boundaries. Additionally, Duthie said Tusayan has proven its willingness to work cooperatively but federal bureaucrats, mainly in Washington, have proven they are not willing to do so.