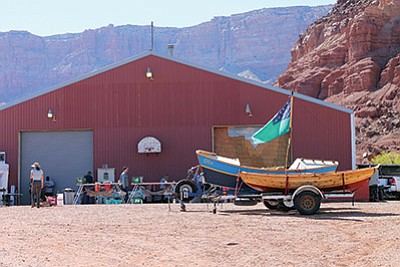 Commercial River guides and outfitters, National Park Service representatives and members of the Grand Canyon river community gather every year at the Hatch Warehouse in Marble Canyon for training and to kick off the commercial river running season. Loretta Yerian/WGCN

MARBLE CANYON, ARIZ. - Every year around April 1, river guides kick off the official first day of the season for commercial trips on the Colorado River.

Around 150 to 200 commercial guides and outfitters converge on the Hatch Warehouse in Marble Canyon for a weekend of training and updates during the annual Guide Training Seminar (GTS).

The warehouse, located right up the road from Lees Ferry, the put in point for river trips headed down the river, is the perfect place for guides and operators to gather and get on the same page for the season.

GTS is in its 27th year and is an anticipated annual tradition for the Grand Canyon river community.

Hamilton has been involved with GCRG for over 20 years and has spent the last 15 years as executive director.

"In turn, commercial river guides use this interpretive knowledge and expertise to heighten their clientele's appreciation of these spectacular resources, building stewardship and advocacy within the river running public," Hamilton said.

"It's a great partnership, it's a great community," said John Dillon executive director of Grand Canyon River Outfitters Association (GCROA) a non-profit trade group made up of the 16 commercial river outfitters contracted with NPS. "If Lynn and GCRGA didn't do this then every company would be doing it individually. It's a real convenient, wonderful way for everybody to get together."

This was Uberuaga's fifth GTS and came on the heels of a recent investigation and follow up report by the Office of Inspector General of an extensive history of sexual harassment and hostile work environment on NPS river trips. Following the report Uberuaga promised reform and extensive investigation by a third party review of Grand Canyon's river operations. In March, Uberuaga disbanded the NPS River Unit which provided emergency and medical services on the river and provided a number of private trips for researchers, politicians and students each year. All NPS trips were cancelled for the remainder of the season.

According to Dillon, one concern of commercial river outfitters on the Colorado is the response time and emergency support boaters will have now that the river unit no longer exists.

"If the commercial or private boaters have an incident or an accident, a situation that requires assistance, that was formerly handled by a river district that was trained in swift water rescue training or had access to zodiac rescue boats, 'ok, now what?'" Dillon asked. "Our main concern is we want to be assured that we still have support and service and search and rescue and the service that the park service is charged to provide us."

Uberuaga said commercial and private operations on the river will have the same amount of support from the park.

"Most recently many of you heard I chose to abolish the river district at Grand Canyon and to start over," he said. "What that means is to be determined, but effective that date, I cancelled all of the river patrol trips this summer. I did assure river operators and commercial operators and the private that we will have, from the rim, search and rescue swift water team ready to be deployed."

Uberuaga apologized for breaking the trust of the river community and took full responsibility for actions by the NPS on the Colorado, promising to do everything in his power to ensure it never happens again.

"What has happened is not acceptable. What has happened should have never happened and I'm damned to determine as a leader to make sure it never happens again. And I'll do my best to put assurances in place, whatever it takes to re-build your trust, to re-build a commitment to this special place that we all have," he said. "Your trust was violated in those incidents, your trust and the public's trust was violated and I try to go back and I say, 'what do we need to do?' There is a long list of things that we're going to begin to do. But I wanted you to know that I take responsibility for that and I own it and I'm determined to do something about it, personally, professionally and with all the energy that the park service has to make this change."

The river training part of the seminar took place after the two day land based seminar. Around 25 participants spent 14 days on the Colorado in non-motorized boats.

"It's a privilege to work on behalf of Grand Canyon, to work with our partners like Grand Canyon National Park and Superintendent Uberuaga, with all the organizations and the tribes, everyone," Hamilton said. "That's what I really, truly enjoy the most. I love to collaborate, I love to bring people together and communicate and I feel like we're all moving for a common goal and I think that's one of the most special things."