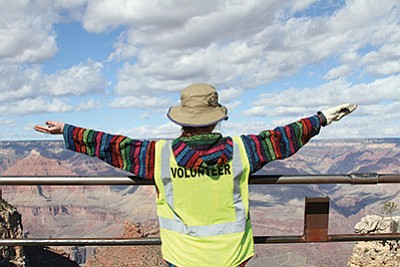 GRAND CANYON, Ariz. - Last month students from all over the country converged on Grand Canyon National Park, ready to learn how to put on a different kind of spring break, one focused on service projects.

Alternative Spring Breaks (ASB) provide college students the opportunity to partner with the National Park Service to provide various volunteer services in the park and around the country.

The program promotes active citizenship and volunteering opportunities for the students, which in turn helps provide leadership training and a chance to extend their networks, with the possibility of future careers with the NPS.

University of Virginia and Longwood University students spent the week of March 7 -11 working with the parks Wildland Fire division.

"This week was an incredible experience to see a new part of the country and learn so much about the Grand Canyon, I have loved the whole week and especially getting to know the rangers and staff. I had such a good time. I hope to come back one day. Y'all rock!" said Ben Donovan, a University of Virginia student.

"I learned that the canyon gives life and takes it away. I learned that nature is to be revered and treated with the utmost respect, above all else. I acknowledged my inner fears more than I have before, and I learned that breathing through them and letting them just be is enough," said Katharine Troth from Longwood University. "I also learned that all of the second chances I've given myself in life have been worth it to be there for our sunset in the canyon."

Suffolk University out of Boston, Massachusetts had 14 volunteers over the week of March 14 - 18 who volunteered a total of 364 hours for the week. They also worked with Wildland Fire and Fire Effects.

University of Northern Colorado from Greeley, Colorado had six volunteers who worked 156 hours in Wildland Fire and Fire Effects.

Katie Fletcher, a trip leader for the Colorado crew, said the trip was far from disappointing.

"I was interested in leading our school's Grand Canyon trip for a variety of reasons: I have never been to the canyon, the ASB trips are so much fun, and I wanted to investigate my interest in working in the park service more thoroughly," she said. "I was certainly not disappointed, as I discovered a new found appreciation for the NPS and a huge interest in working here. It was an amazing week in an amazing place."

In February, Johnson State College from Johnson, Vermont had 12 volunteers at the Canyon for an ASB program. Johnson State students volunteered 28 hours per volunteer for a total of 336 volunteer hours for the week.

Most recent ASB students from Chapman University in Orange, California volunteered to help with litter pickup at the park and worked with vegetation crews. A student from Chapman said her spring break was totally unique and one she would do again.

"This trip has allowed me to see the Grand Canyon from a different perspective to the one I would get as a regular tourist," she said. "Instead of coming here to snap a few shots, I got to participate and be actively involved in the community that maintains the beauty of the canyon. This has been the most enriching experience, and I definitely would not have traded my spring break for anything else."

"We have had other week-long alternative breaks since January 2016 and more to come for this calendar year," Nelson said. "(Around) 1,024 of the hours comes from training that I will be hosting July 24-29 at Albright Training Center."

In 2014, Grand Canyon volunteers (not just ASB programs) had over 1,700 volunteers who were a vital part of park operations. Their work totaled 84,622 hours and helped save the park labor and other expenses at an annual dollar value of $1,952,229.54.

More information about Alternative Breaks and other volunteer opportunities at Grand Canyon is available from Nelson at (928) 638-7307.