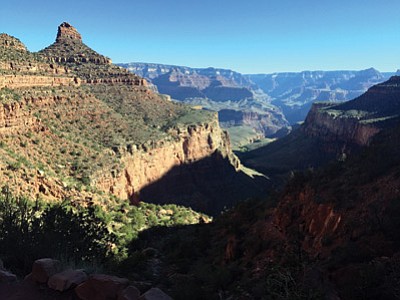 A special meeting was held Sept. 24 to discuss possible impacts and what plan of action the council should take.

Rumors of an imminent shutdown have been circulating because of disagreements between Democrats and Republicans over a budget bill and the country's debt ceiling. Analysts think Congress will likely pass a bill to keep the government funded through Dec. 11. Congress will then need to raise the nation's debt ceiling sometime this fall to avoid a shutdown similar to the shutdown that occurred in 2013, which lasted more than two weeks and closed Grand Canyon National Park (GCNP).

The town of Tusayan wants to talk with GCNP Superintendent Dave Uberuaga to discuss the likelihood of a shutdown.

"We contacted the superintendent's office and were told they are referring all inquires to the Washington office," said Tusayan Mayor Greg Bryan. "They do not have anything to share with us at this time."

"Last week I got a call from Senator McCain. He wanted to talk about the closure and asked that we send him a letter talking about what happened during our last experience and what this could possibly mean to us right now," Bryan said. "He is going to work very hard to try to keep these people from shutting the government down."

Bryan is waiting for a response from Senator Flake's office and said Rep. Gosar does not at this time feel a shutdown is imminent.

Additionally, Bryan has been in contact with the Arizona Office of Tourism and the Grand Canyon's River Runner Association (GCRRA).

"They (GCRRA) have some strong concerns because if (the government) was shutdown Oct. 1, they would be losing around one million dollars," Bryan said.

In the case of a shutdown, council members stated they would like to have a plan of action and a dollar amount they could promise if they were called on to help re-open the park.

"We need a solution now from the congressional side, but I don't think that's going to happen, so with that said, I absolutely support keeping the region open," said Vice Mayor Craig Sanderson. "I'm just disappointed that we are a political pawn in this again."

Councilman Al Montoya supported Bryan and Sanderson's positions and said having a plan already in place is important.

"'It's like what you said Mayor,' lets give direction to continue moving forward, the last thing we want is for it to shutdown," Montoya said.

Councilman John Rueter said the town needed to be proactive and have a dollar amount they could promise if a shutdown occurred.

"We know what we did last time, we know the figures that went on, we know what came back - we know how that worked, so that's one question I have," Reuter said.

After discussion, council members said they were willing to put up to $200,000 toward funding to help the park remain open, if a larger amount should become necessary the council said they would reconvene in a special meeting to discuss the matter.

Rueter also questioned whether Arizona Gov. Doug Ducey has been contacted about the potential shutdown.

Bryan said he had been in contact with the Office of Tourism, which advises Gov. Ducey.

During the government shutdown in October 2013, six states - Arizona, Colorado, New York, South Dakota, Tennessee and Utah - advanced about $2 million to the National Park Service to temporarily re-open national parks, including Grand Canyon, Mt. Rushmore and the Statue of Liberty.

The Department of the Interior released a report in March 2014, stating Arizona had the second-highest losses in the nation because of the shutdown, trailing only California, which lost $31 million.

Arizona saw a $27 million drop in spending at its national parks during the partial federal government shutdown, with $17 million in losses at Grand Canyon National Park alone, according to the report.

The shutdown also left many Tusayan businesses scrambling to cut their losses.

The uproar led Tusayan business owners and citizens to not only stage a protest, but also raise more than $200,000 to partially reopen the park. Along with private contributions, the town allocated $200,000 from its emergency funds. However, the Park Service said it was against federal law to accept third-party donations even though it was allowed during the 1995 government shutdown.

During the 2013 shutdown the National Park Service entered into an agreement with the State of Arizona to allow the park to re-open and temporarily operate during the shutdown.

In total the town of Tusayan and local businesses raised around $426,500 to help re-open the park.