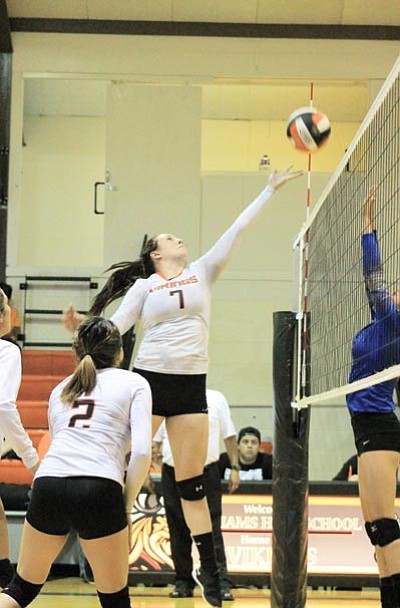 Grantham was impressed with the girls' play against the Chino Valley school. Chino has close to 1,000 students compared to Williams 225.

"It was a very close game with a higher division school," Grantham said.

She said defensively Koss and Andrea Hernandez led the team with digs.

Due to injuries, Grantham has been relying on sophomores to fill out the varsity team roster. Destiny Pennington led the team in serving.

"She made all of her serves over five sets, so that's pretty impressive," Grantham said.

Grantham's two sophomore blockers averaged five touches per set to lead the team at the net.

Grantham noted that the girls had a big week of homecoming activities and had played a powder puff football game prior to the game.

"I was very proud of them," Grantham said. "They played the best they could against a bigger division school and they almost had them."

The Lady Vikes next play a home game against Mayer Oct. 1 and then travel to Joseph City for a tournament Oct 2-3.