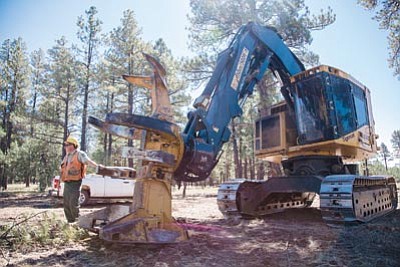 WILLIAMS, Ariz. - There are no axes. No men with chainsaws. There is no manual limbing or bucking. This is not your grandfather's logging operation. This is 21st century logging in your backyard.

The logging taking place on the Pomeroy task area of the Williams District of Kaibab National Forest is a dramatic sight. Massive machines dot the landscape in a whirr of activity. They cut and strip and stack logs as if they were no larger than carrots.

Good Earth Power is logging the area as part of the Four Forest Restoration Initiative (4FRI). The goal of 4FRI is to restore 2.4 million acres of Ponderosa pine forest in northern Arizona.

There is a clearing off of Forest Road 141 at the entrance to the Pomeroy task order. A Good Earth owned tracked feller-buncher harvesting machine is parked near the road. The arms of the feller-buncher boom grasp trees while the rotating blade at the base cuts them off at the root.

The feller-buncher cuts one tree at a time, but can carry four trees in its claw to the landing area.

Further into the task order area, three more harvesting machines are at work. A skidder hops and jumps through the slash moving logs to processing piles. Two large stroke delimbers take turns grabbing trees and pulling them through the main body of the machines.

The machines move trees, slash limbs and cut logs to the desired length. The booms on the delimbers have sharp knives and arms that conform to the tree and cut off the limbs as the stroke arm extends. Inside the boom is a bucking saw with a calibrated gear that determines the current length and cuts.

"These guys clean them up," Magura said. "You'll see some of these are longer and there are shorter ones. It's for different products. The mill here in Williams only takes the smaller ones."

How thin is a thinned forest?

According to Kaibab Public Information Officer Jackie Banks, most of what Good Earth is removing from the Pomeroy area as well as the KA and Dogtown task order areas on the Williams District are smaller diameter trees. As opposed to logging in the past, the Forest Service is trying to leave the robust trees standing to create a diverse and healthy forest.

Prior to the approval of the task order cutting area, Kaibab silviculturists walked through the stands and determined a prescription for each acre. Crews then took the prescription and marked the trees with paint for removal.

"We're not looking to have one tree every ten feet," Banks said. "We're looking to mimic the pre-settlement conditions of the forest. You'd have a group of maybe three trees and then a big open area."

Banks said that removing the trees will allow the native grasses to recover and open up the watershed. The grasses will carry low-intesity fires and keep the forest litter from accumulating. The spacing of the trees will prevent intense crown fires from burning through the canopy.

On the Pomeroy, Kaibab forest managers are hoping to clear a large percentage of the trees off the 1,646-acre area. They estimate that historically there were only one to five trees per acre in the area.

"We can't get down to that low of a number," Banks said. "Some of these areas have hundreds of trees per acre so we're just hoping to get closer to some of those historic conditions."

Banks said the agreement with Good Earth is basically a goods for services contract. Good Earth is providing a service to the Forest Service by thinning the trees while making a profit off the timber.

"We need the industry to help us achieve the end results of a healthy forest," Banks said. "Because it is so expensive to do this kind of work. You're talking $1,000-2,000 per acre if we were to pay to have it treated."

Activity is picking up

The last stop through the Pomeroy is to witness two dangle head processors. They are two more delimber machines that do impressive work.

The dangle head sits at the end of a boom on a wrist-like swivel. The head has wheels that pull the tree through, delimbs it, measures it, and then cuts it to length. According to Magura, these machines can process two to four trees per minute.

Log piles, trucks and harvesting machines are scattered throughout the Pomeroy task order area but only a handful of men are needed to operate them. Magura said there are five to 10 workers in the field on a given day.

Banks said that Good Earth is meeting the specifications of their contract and that the planning and implementation of the timber harvesting has taken longer than expected, but they are beginning to see good progress.

"We are as anxious as the public to see this get done," Banks said. "We're seeing more activity and it's picking up. We're very hopeful that it's going to continue."