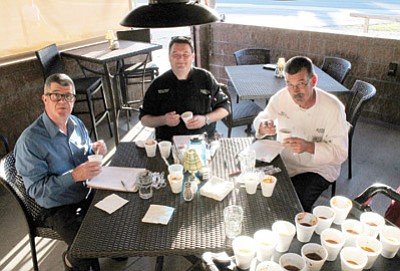 TUSAYAN, Ariz. - "You can call it Captain Brady's chili," said Rotary's new chili champion Brady Harris. "It's mildly spicy with a heat that kind of builds."

The secret to Harris's now famous red chili is bacon. According to Harris, the key is adding the right amount of bacon to previously browned ground beef, black beans, butter beans and just a hint of cinnamon.

The annual Grand Canyon Rotary Chili Cook-off had winners in two categories and a People's Choice Award. Harris walked away with the $50 grand prize for People's Choice Award and dinner for two at Plaza Bonita. Rob Gossard won the alternative chili category and John Schoppmann won the traditional chili category. Winners in both categories received a $10 gift certificate to R.P.'s Stage Stop and one free large pizza from We Cook Pizza.

In addition to offering free chili and cornbread tasting to the public, Rotary awarded its annual community grants. School of Rock, a program promoting professional musical mentorship at Grand Canyon School, was awarded a $600 grant to be used toward equipment and supplies. Tusayan Fire Department received $500 to be used for facility equipment and Kaibab Learning Center received a $500 grant, which will be used for a tuition scholarship.

The cook-off is an annual tradition for Grand Canyon Rotary, each year the club awards grants to non-profit organizations that need funding for a program or project in the Tusayan or Grand Canyon communities.

Award recipients will be invited to a future Rotary meeting to present on their program or project.