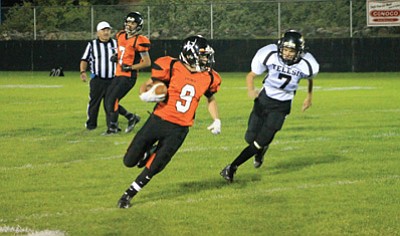 Viking running back Luis Cardenas works his way through the line during the Telesis Prep game. Wendy Howell/WGCN

WILLIAMS, Ariz. - Williams Volunteer Fire Department had a busy night Sept. 11 and it wasn't due to callouts for fires or accidents.

The fire department launched a fireworks display for every Williams High School Viking touchdown. The Vikings played hard and pulled in nine touchdowns as they tromped Telesis Prep 62-0.

"Our kids did very well," said head coach Jeff Brownlee. "We executed very well offensively and defensively. We knew they weren't going to be able to handle us much. But it's good to get a win anyway."

The Vikings got off to a big lead in the first quarter with multiple touchdowns by Martin Soria, Cruz Pearson, Luis Cardenas, Diego Pedraza and Tate Grantham.

"We played well and a win is a good thing," Brownlee said.

Brownlee said he scouted Telesis Prep and knew the team was not a powerhouse. He said he was aware the team was going to be overmatched by Williams.

"After being beaten up on the first two games of the season and having a by, the kids couldn't wait to play again," Brownlee said.

Brownlee wanted to make sure the Vikings would still execute plays and compete at a high level with Telesis Prep. He spoke to the team about using the game as a way to gain experience before they begin sectional play.

"We got the younger and less experienced kids involved to help gain them some confidence," Brownlee said. "In practice they don't really get a chance to run plays like they should. They don't get to run them for long periods of time like the varsity. It was good to get the younger kids some experience running the ball and running plays."

Brownlee was able to get his younger players in early in the second quarter for extra playing time. He was impressed with the work of Carlos Mejia, Emmanuel Flores, Brandon Martinez, and Michael McNelly.

"McNelly played linebacker and was one of our leading tacklers," Brownlee said. "Flores had been injured and we were able to get him some reps too. We think he can be a factor for us."

Pedraza stepped in to relieve Soria at quarterback. Brownlee was impressed with Pedraza and said he is counting on him for more action in future games. Cardenas also saw a lot of play in his first year of football.

"A lot of kids who haven't played high school ball got an opportunity to play and played very well," Brownlee said.

After the Vikings ran the score up to 46-0, officials kept the clock running. Brownlee said he was trying hard not to run up the score against Telesis Prep.

"We tried to find ways where we wouldn't score in the second half," Brownlee said. "I talked to the kids at half time about character. We're always talking about character and life skills and how life involves football. Discipline and character means a lot for us on this football team. The last thing we want to do is take a football team and humiliate them so we tried to figure out ways we could play football hard yet keep the score down. That was our goal in second half."

The Vikings next game is against El Capitan on Sept. 18 in Colorado City. El Capitan is the first game against a sectional team for the Vikings.

"They are going to be a good test for us," Brownlee said. "We believe that if we execute and run our game plan we'll come out on top. El Cap is much better than Telesis Prep, which is good because we want good stiff competition going into our section. This is an important game for us."