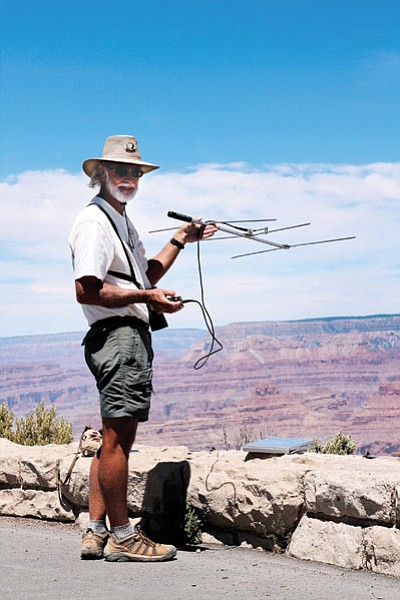 GRAND CANYON, Ariz. - There's no mistaking the calls of, "Condor Bob!" from the lips of tourists as they rush over to the tall, slender man standing on the edge of Hopi Point on the South Rim of Grand Canyon National Park. Long time wildlife volunteer Bob George is known by many names but Condor Bob is what tour guides at the Canyon call him.

George has spent the last six years volunteering with Grand Canyon's Wildlife Program as well as three years of other volunteer work in different areas of the park.

George started his volunteering adventures after his wife, Laurel Roth, retired and announced her intentions to become a ranger at the Grand Canyon.

"I just laughed and laughed and was like, 'yeah right, like there's nobody else applying for that job, you've got to be kidding,'" George said. "Well, she didn't get hired as a ranger, but she did get hired as a campground host on the North Rim."

Roth was later hired as an emergency hire at the park and the next summer George made his way, from the couple's home in Grand Rapids, Michigan, to the South Rim.

While there, he was asked to help build tent sites at a campground on the North Rim - his first taste of volunteer work at the Canyon. He then spent a year hiking and exploring the Canyon before deciding to pursue an interest he already had experience with - wildlife research.

"I decided what I had always done in my spare time anyways was wildlife research," George said. "So I walked into Wildlife and said, 'hey, here I am, I'm willing to work.'"

"There's not much similarity between whales and condors,' George said about his time in wildlife research but remarked that his knowledge in desert animals and their environment continues to grow.

George volunteers six months out of the year, his average day starts at 7 a.m. when he travels to various points above and below the rim of the Canyon to help in tracking and monitoring of California Condors.

One way the park monitors condors activity is with the use of the Yagi antenna, a directional antenna that works as a receiver and transmitter to locate signals from the bird's tracking device. The park monitors all aspects of condor's lives, with special regard for their first year of life.

Condors only have one chick every two years and use caves along the edges of the Canyon to lay the egg. After a 56-day gestation period the chicks, weighing around nine ounces, hatch. One reason condors only have one chick every two years, according to George, is the amount of time it takes for the chicks to become strong enough to be on their own. Parents will care for the chicks for the first six months of their lives. By the time the chick takes its first flight, it can weigh up to 23 pounds. Average adult condors weigh in around 20 pounds and have a wingspan of nine and a half feet. The condors, which are considered one of the rarest birds in the world, are monitored for a number of reasons.

"There's about 70 birds in this flock, there's been 70 to 75 for a long time," George said. "It's kept at that level, primarily because it's a reasonable study size and it's a manageable group."

One of the major causes of death for condors is lead poisoning. Because condors are scavenger birds, preying on big game like deer, elk and bighorn sheep, they have been known to eat animals killed by hunters, which can contain fragments of lead bullets.

"It only takes them a couple of minutes to fly across (the Canyon), so you're not going to keep them here," George said.

For George, who has taught everything from preschool to graduate programs, education is important and educating hunters on the effects of lead poisoning for condors, he believes, has led to a recent decrease in condor deaths linked to lead poisoning.

"Here in Arizona most of the hunters have switched to copper bullets," he said. "The hunting groups in Arizona have done a magnificent job of educating hunters."

Two years ago George was recognized for his volunteer services with a 3,000 hour volunteer pin marking the time he has given to the park. On average George puts in around 160 to 180 hours per month.

When he is not volunteering at the Canyon George lives on his boat in the Bahamas, where he pursues his passion for sailing. He believes the best way to go about volunteering is to 'just go for it.'