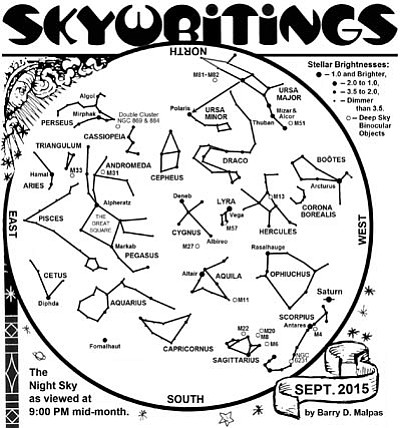 A total lunar eclipse is one of the most interesting of astronomical events to observe and only occurs on a full moon night when the sun, Earth and moon are aligned in space in a straight line. This is known as in syzygy, when the moon passes through some portion of Earth's shadow.

Unlike a solar eclipse, where one usually has to travel to some specific, and often remote, location on Earth, a lunar eclipse may be easily viewed with the unaided eye, through a pair of binoculars, or photographed with a camera and telephoto lens on a tripod, as long as you are on the evening side of the Earth facing the moon during the time of the event, barring inclement weather.

The first documentation of a lunar eclipse, which took place in 1137 BCE, is found a book of the Zhou Dynasty in China. Eclipses have often been associated with portents of doom, death and destruction, with famous people and events. The lunar eclipse of Aug. 28, 413 BCE is associated with the Siege of Syracuse, one of the most important campaigns during the Peloponnesian War, where the well-equipped Athenian army was annihilated, leaving its country almost defenseless against Spartan attack. On April 15, 406 BCE, another tragedy occurred during a lunar eclipse when the old and venerated temple of Athena at Athens burned. An eclipse of the moon occurring on Sept. 20, 331 BCE, took place just before the battle at Arbela, which was fought by Alexander the Great. The lunar eclipse of June 21, 168 BCE is described by Gallius, general and orator of the Roman Republic, "When there was an eclipse of the moon in the time of Perseus of Macedonia, the report gained popular credence that it portended the eclipse of the king." Carneades, the Greek philosopher, and head of the New Academy at Athens, died during the occurrence of a lunar eclipse on Nov. 5, 129 BCE. King Herod succumbed shortly after the lunar eclipse of March 23, 5 BCE. And the death of Caesar Augustus occurred around the appearance of the lunar eclipse of Sept. 27, 14 CE.

Historically, lunar eclipses were predictable in parts of Europe at least from around the 7th century BCE and have been used to the advantage of those who could predict them. On March 1, 1504, when some of the indigenous peoples of Jamaica refused to help Christopher Columbus and his men with supplying provisions, he noticed the up-coming eclipse in his almanac and so foretold the event as a sign of the wrath of his god. "The Indians observed this and were so astonished and frightened that with great cries and lamentations they came running from all directions to the ships, carrying provisions and begging and promising they would diligently supply all their needs in the future."

A lunar eclipse can occur two to four times each year when the moon passes through some portion of the Earth's penumbral or umbral shadows. Most are only partial and the penumbra is barely noticeable. A total lunar eclipse takes place when the moon travels completely into the Earth's umbral shadow. The red color of the moon is produced by the bending of light through the earth's atmosphere. The dirtier the air around the Earth, the redder the moon appears, similar to the reddening of the sun at sunset.

Members of the Coconino Astronomical Society, in conjunction with the city of Williams, will put on a Star Gazing Party from 7:30 to 9:30 p.m., at Glassburn Park, in the natural area west of Rod's Steakhouse parking lot. Several large telescopes will be on hand to view the moon, planets and other celestial objects. You may wish to bring a folding chair, or blanket, and your own binoculars.