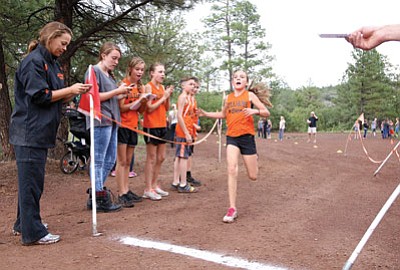 Despite the muddy conditions, the runners performed well in a competitive environment.

"The kids loved it," said head coach Lela Schober. "They love the mud."

Despite having to change the course due to extremely muddy trails, Schober said the visiting teams seemed to enjoy the race.

"I think some of the teams were more comfortable running the roads anyway," Schober said.

Schober was impressed with the Williams runner and said they turned in great times.

"We were up against some really stiff competition," Schober said. "The winner of the girls' varsity race came in at 12:40, which is extremely fast for a 1.8 mile course."

Schober said that all of the Williams runners stayed above the middle of the pack. She was happy to see the high level of competition that participated.

Approximately 150 runners participated in the race and Schober was happy with the turnout.

"The kids felt like it was fun, but said it was a hard meet," Schober said. "I'm proud of that. I didn't want it to be mediocre or easy. I wanted the kids to have a challenge."

Schober said they team exceeded her expectations and ran with a lot of heart. She said many of the runners ran their best times of the year so far.