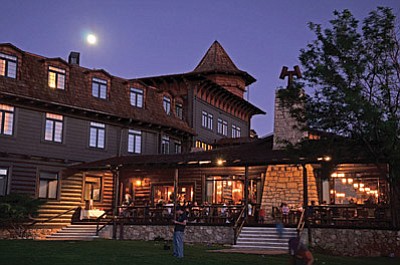 The El Tovar on the South Rim of Grand Canyon National Park is one of many lodging and hospitality facilities operated by concessionaires contracted by the park. Photo/NPS.

"We are pleased to continue our long relationship with this important park partner, and we look forward to working together to implement some exciting improvements to services on the South Rim," Uberuaga said.

The contract allows Xanterra to continue to provide lodging, food services, retail, transportation, mule rides and other services on the South Rim.

Xanterra, the incumbent operator, submitted the selected offer in response to a prospectus issued earlier this year.

In December 2014 the National Park Service failed to obtain bids that met its terms for the 15-year concessions contract, The park had already made several amendments to the contract since August 2013 and Xanterra had filed a lawsuit against the park in Oct. 2014 stating the contract the park offered did not provide adequate housing for its employees and nearly tripled its franchise fee, giving unfair advantages to its competitor.

According to a report by the Associated Press, the park planed to revise the proposal before putting it out to bid again. A one-year temporary concession contract had been awarded to Xanterra in January.

Prior to the award of the temporary contract, the park was to pay Xanterra close to $100 million toward buy-downs of its investments in facilities at the Canyon. This reduction was arranged to make a future long-term prospectus for the contract more competitive.

The new 15-year contract is one of the largest in the National Park Service (NPS) in terms of revenue and lodging inventory. The services required in this prospectus have generated an average of approximately $66 million in gross revenues annually.

New services with the contract will include a re-constructed Maswik South Lodge, improved food offerings including food trucks and other improvements to operations and services.

This historic lodging and hospitality contract (CC-GRCA001-15) will include lodging, retail and food service in the historic Grand Canyon Village including the El Tovar, Bright Angel Lodge, Thunderbird and Kachina Lodges, Maswik Lodge and Phantom Ranch, as well as retail and food service at Hermits Rest. The contract will also continue to include transportation services such as bus tours, taxi services and mule rides.

Concessions contracts are developed and issued under the authority of the Concessions Management Improvement Act of 1998, P.L. 105-391, and its attending regulations in 36 CFR §51.