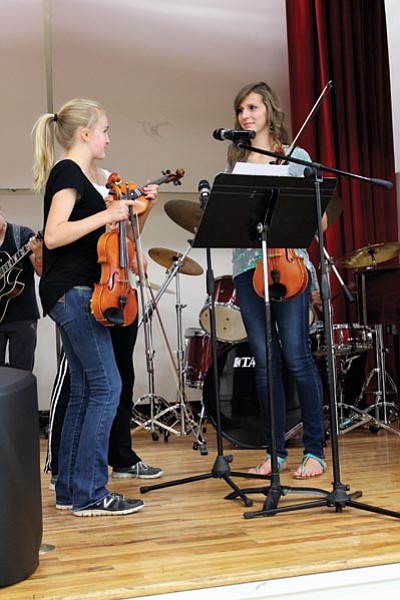 Around 20 students signed up for the music program, which has become increasingly popular since it's conception in 2006.

"This is the biggest participation we've ever had," said Joe Deninzon co-founder of School of Rock. "We had to turn kids away because we can only work with a few kids at a time."

This was the eighth annual School of Rock, which was started as a side program of the Grand Canyon Music Festival.

The school is open to middle and high school students at GCS and according to the festival's website, gives students 'the opportunity to experience all aspects of band life.'

Every year, members of The Bonfiglio Group spend four days teaching students everything from rock and roll history to how to play it properly.

"Basically, I think they have a great experience doing it, a lot of them have never played before," Deninzon said. "It's a lot of skills they can acquire - from teamwork, to learning a musical instrument, to being organized and learning about music. It's inspiring to them and I feel like we're giving them a life experience."

The school is fast paced and during their limited time with students, Deninzon and School of Rock co-founder, musician Stephen Benson form a band with students and help them put together a 40-minute concert, which they perform twice.

Deninzon and Benson, both professional musicians from the New York area, have performed at the Grand Canyon Music Festival with festival co-founder, Robert Bonfiglio as The Bonfiglio Group. Deninzon also performed with Sweet Plantain Sept. 4 and 5.

Over the last six years, Benson has taught and helped students gain confidence as musicians through the school.

"It's very rewarding, they're great kids," he said. "It's always amazing to see the difference between Monday when we meet them to Friday when they do their concert. They've come so far and they all really enjoy it and get a lot out of it. It's really rewarding for us too."

In addition to giving instruction to musician, Deninzon and Benson help singers find their voices. Eighth grade student Erika Jane Hausa said she loved working with Benson and Deninzon because they challenged her.

"They're funny, they're cool, at times they can be strict but they really do care that we learn music, you really can tell," she said. "We've learned a lot of different songs and they've also taught the guitarist some new ways to play. It's been really fun."

Every year the school mixes new and old genres and eras of music to educate students about music history and learn new skills.

"We try to educate them about rock history and classic rock, so we mix (classic rock) with music that they know and can get excited about performing," Deninzon said. "I think just playing rock and roll is therapeutic for people, because it builds confidence, it teaches you about hard work, because it is hard work. It's also a good way to put your energy into a positive place."

This year students learned five songs: "Don't Fear the Reaper" by Blue Öyster Cult, "Rockin' the Free World" by Neil Young, "Seven Nation Army" by the White Stripes, "Ain't No Sunshine" by Bill Withers and "Empire State of Mind" by Jay Z. They performed the songs two times, first at a private concert at the school Sept. 3, followed by a performance at the Shrine of the Ages Sept. 4.

"It's always a miracle when it comes together," Deninzon said. "But they really want to do it, they work hard (and) it all sort of comes together, thanks to the invaluable help of Bently Monk, the music teacher here. He does all the preemptory work before we get here."

"It's cool, because you get to keep the beat," Lacapa said. "That's important because it keeps everyone else in time."

Grand Canyon Music Festival administers School of Rock with the support of Grand Canyon School (GCS) administration and through an Arizona Commission on the Arts grant and the state of Arizona and the National Endowment for the Art fuding, the Grand Canyon Rotary Club, and Tusayan Sanitary District,