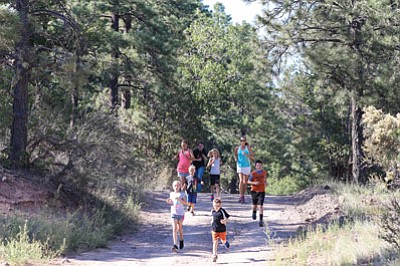 WILLIAMS, Ariz. - They're not even breathing hard.

Clad mostly in bright orange singlets, the Williams middle school cross-country team took to the gym Sept. 3 for sprint work in anticipation of their first race of the season on Sept 4.

The large group of fifth to eighth graders cheered each other on and ran with smiles on their faces. How can that be? How can running just to run be any fun?

Schober is in her second year of coaching the cross-country team. She has five returning runners this year. Meghan Ford, McKenzie Carter, Mauricio Gonzalez, Maddie Olsen and JW Olsen are all back on the squad.

Schober said the returning team has improved a lot since last year, and these older runners motivate the new runners.

The Falcon runner's had an informal relay race last week at the Northland Prep Academy Relays. The teams were divided into groups of four, with two boys and two girls, and each runner ran a one-mile leg of the relay.

"It's a four-mile relay," said Schober. "It was informal, but I think our first relay team came in fifth out of about 45-50 teams. They had a good performance."

Schober said the runners' training increases each week as the distance of the races increase. The team began the first week by working up to running a mile. Throughout the next few weeks the distance will increase to 1.5 miles and 1.7 miles until by the end of the season the team will run four miles. She also adds sprints and strength training to the workouts.

"By the end of the season I want them to be running four-miles a day in practice," Schober said. "Then in the 2.5 mile race they won't drop to a walk."

To keep the kids motivated, Schober adds variety to the practices. She said Williams Unified School District has been gracious in allowing them to use school transportation to vary the practice locations. Schober often takes them to the Buckskinner Lake trail or other local trails to change up the scenery.

"It's a huge motivator," Schober said. "That's huge for them to get in that little bus and go somewhere. It means so much to them."

Schober said the nice thing about cross-country running is the kids compete against themselves as well as other runners. She said the kids are just figuring out how far they can run, and completing the various distances is a huge accomplishment.

"Everyday they are pushing themselves hard," Schober said. "I used to just jog and walk at the end of the pack, but this year I have to run. They all run."

Schober is encouraging parents and friends to come out and support the team at Williams' first ever middle school cross-country race at Buckskinner Park Sept. 9 at 3 p.m. Fans can park at the Kaibab National Forest office and walk to the Buckskinner picnic area. Runners will pass through the picnic area three times before completing the race.

"Every kid that passes over the finish line is amazing," Schober said.