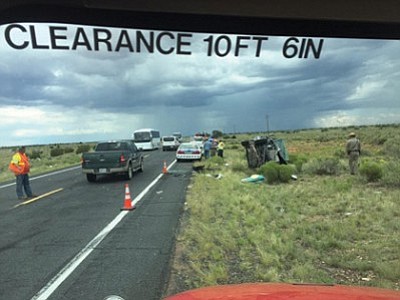 Officers and firefighters clean up the wreckage from a five-vehicle accident on Highway 64 near Valle. Photo/High Country Fire

According to High Country fire chief Robert Trotter, a sport utility vehicle (SUV) was traveling southbound on Highway 64 and attempted to pass a slow moving bus. As they began to pass, another SUV was traveling northbound and both vehicles hit head-on. A sedan attempted to stop to avoid hitting the wreckage and was hit from behind by a truck. The impact between the two SUVs caused the bus to leave the road also.

When Trotter arrived, bystanders and the officers on scene had removed everyone from the vehicles. High Country responders triaged the patients, with three critical patients prepped for helicopter transport.

"It was like round-robin with the helicopters," Trotter said.

Trotter said the accident occurred in a passing-zone, but the southbound SUV failed to see the oncoming northbound SUV.

"I'm surprised we don't have more of those," Trotter said.

Last year, High Country responded to 213 emergency calls. They respond to fires, medical incidents and vehicle accidents along with DPS and Coconino County Sheriff's Officers. Trotter said that 67 percent of their calls are for medical incidents.

High Country is a private, non-profit volunteer fire and rescue company that provides emergency services from Williams, Valle, and Highway 180 and beyond. They also provide mutual aid to surrounding fire departments and nearby state and federal land agencies.