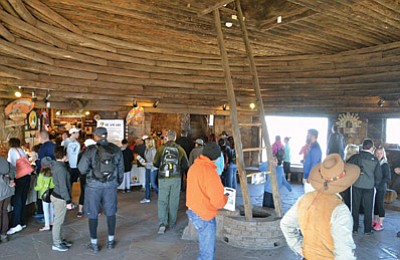 Originally from Indian Wells, Begay learned how to weave from his grandmothers and began weaving in 2013. Since then, he has participated in various events, including the Heard Museum Weavers Market and the Santa Fe Indian Market.

The Labor Day weekend demonstration is the last of eight in the 2015 series.

The Cultural Demonstrator Series and other programs, exhibits and opportunities will continue next year and in the future with the help of the park's 11 traditionally associated tribes, Grand Canyon National Park's Inter-tribal Advisory Council and a grant from the American Indian Alaska Native Tourism Association.

More information about the future of Desert View is available at nps.gov.