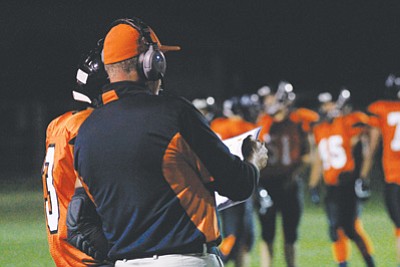 WILLIAMS, Ariz. - Despite a tough loss to Mogollon in the first round of state playoff games, Williams Viking football is clearly a program on the rise.

The Vikings led the Mustangs 12-6 into the fourth quarter when Mogollon pulled off a trick play that turned into a 50-yard touchdown with four minutes left in the game. Mogollon made the two-point conversion and won the game 14-12.

"I'm really proud of them," said coach Jeff Brownlee. "It was a great football experience for our kids in a playoff game and they realized they can play with anybody. We were sad to take that loss because we played so hard and so well."

The Vikings got on the scoreboard first with a one-yard touchdown run by Cruz Pearson following a balanced run and pass offensive drive. The Vikings failed to make the two-point conversion.

"We were able to control all the momentum and move the ball up and down the field in the first," Brownlee said. "The kids were riding high on that."

Mogollon mirrored the Vikings in the second with a touchdown and failed two-point conversion. The Vikings responded with a Martin Soria to Ethan Johnson pass that brought the Vikings up 12-6 going into half-time.

The Vikings came out of the locker room in the third quarter ready to play but hurt themselves with two pass interceptions and several penalties.

"This really took us out of our offensive rhythm," Brownlee said. "We would have some good drives and then we would have a penalty that would set us back. We gave Mogollon pretty good field position on a couple interceptions."

Despite tough play by the Viking defense, Mogollon pulled off the trick play in the fourth quarter that led to a touchdown and two-point conversion to take the lead 14-12. The Vikings couldn't reverse the momentum with just a few minutes left in the fourth.

"There's no question it was a defensive game," Brownlee said. "Our defense was awesome, we only gave up six points in the first half and then the trick play in the fourth. That is part of the game though and we need to honor everything. I really respect their coach and program."

"We really worked on our passing game this week," Brownlee said. "It really helped us to move the ball."

Despite losing two strong seniors with Mario Pedraza and Joaquin Guiterez, Brownlee said he is excited for the future of Viking football. He praised the dedication of assistant coaches Tanner Grantham, Tiger Grantham and Dave Ernst.

"They've done an outstanding job and put in a lot of time," Brownlee said.

The Vikings ended the season with a 5-4 record.

"It was an exciting year," he said. "We had a lot of success and we believe we've got a pretty good foundation to build on. The nucleus of this team is still together next year."