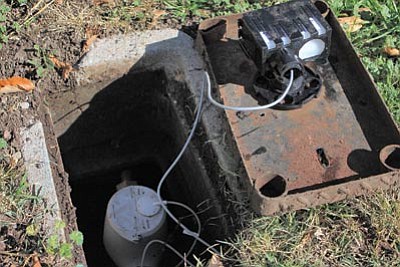 The city of Williams has almost completed the installation of new water meters like the one above for about 1,500 residents. Wendy Howell/WGCN

Christiansen and other city workers are in the process of replacing city water meters for approximately 1,500 residents and businesses. In the process they found at least 25 of the old meters had wires cut or had been tampered with in other ways.

"Its not just theft from city hall," Christiansen said. "Its theft from every resident in the community because you're not paying your fair share."

Christiansen said the tampered meters kept water use signals from reaching meter readers and thus several residences and businesses were not paying for the water being used. In some cases the thieves had not paid for their water in seven to 15 years.

"Basically you come down to the city and say "I want my water service turned off," Christiansen said. "So we go out and turn off your meter and then you go out and cut the wire and turn the thing back on."

City Manager Brandon Buchanan said one of the tampered meters showed more than 1 million gallons has been used and was never recorded by the city. He said the loss to the city is more than $100,000 from that meter alone.

"It happened because if the system was turned off, it was off in all the books," Buchanan said. "Then they (the resident or business) turn it back on and we don't read it because it's turned off in our system. The old software doesn't reconcile the two."

Buchanan said the new meter system will eliminate this problem. He said the new system reads the meters every hour whether the residence or business is using the meter. He said if a meter is tampered with, the system will send out an alert and workers can investigate.

City Finance Director Keith Buonocore said the city will meet with the Williams Police Department and legal counsel on what recourse they have for tampered meters.

"As we're trying to address the 40 percent of unaccounted for water...that's part of it right there," Buchanan said referring to the tampered meters.

Managers also looked at whether the water meters were recording properly. As water meters age, they gradually start to under-register the amount of water customers use, meaning residents are paying for less water than they are using. City managers began the process of replacing the water meters after testing 21 residential meters in early 2014. Officials found that on average the meters were registering with about 72 percent accuracy. The city staff estimated that $380,000 had been lost in revenue from the old meters.

"It's not necessarily old systems, old pipes or leakiness," Christiansen said. "Some of it's just uncollected revenue."

The new meters are Sensus iPerls. City officials chose this kind of meter because they have installed a limited number of them in the past with good success. Christiansen said they are a very reliable meter that is magnetic and has no moving parts.

"Often people said their water was moving slowly because they thought a rock was stuck in the meter," Christiansen said. "Well these you can see right through."

A single tower located near the south water tank in Williams will collect the data from the meters. City billing employees can download the data from the tower to city hall. Meters can also be read from hand-held devices and vehicle readers. The system has not been tested yet but Christiansen said the vehicle readings show that the new meters are working properly.

"As far as the radio reads from the vehicles, we've had 100 percent accuracy," Christiansen said.

He said 1,298 meters have been replaced and they still have 131 left to go. The city is hoping to have the meters replaced in the next few weeks.