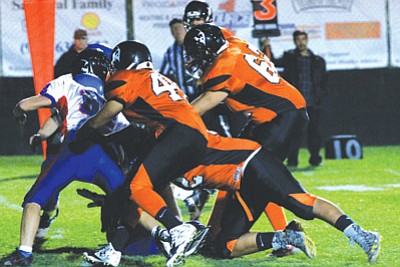 WILLIAMS, Ariz. - The Vikings head coach Jeff Brownlee entered the season amid questions about whether the program could succeed in the fast paced world of eight-man football. Two big early season losses put the decision on the hot seat, but six games later with a 6-2 record, the talk is nothing but praise.

The Williams Vikings moved to 10th place and secured a spot in the Division VI state playoffs with their 26-8 win over Joseph City Oct. 16.

The top 12 teams in the division qualify for the playoffs and the Vikings knocked Joseph City out of the number nine spot to secure a berth.

"We qualified for state and the kids are motivated and excited," Brownlee said. "I'm very proud of our kids and our program."

Despite the drizzly wet weather, the Vikings took the lead early in the evening game at Joseph City. Zack Perkins put the Vikings on the board first with a 10-yard reception from Martin Soria.

"Zack was a workhorse," Brownlee said.

Both teams exchanged punts but no points were scored in the second until Cruz Pearson torched the field with a 67-yard run that set up Soria for a 3-yard touchdown push, which allowed the Vikings to leave the field at half-time 12-0.

"The whole drive was set up by Cruz's long 67-yard run," Brownlee said.

Joseph City came out in the third quarter with a sustained long drive that led to a touchdown and two-point conversion. The Vikings immediately fired back with a counter-play by Francisco Ortiz who took the ball in on a 45-yard touchdown run.

"It was good to see," Brownlee said. "I think Joseph City thought the momentum was changing and for us to get a quick hit after they scored kind of took the wind out of their sails."

Atlhough the Vikings missed the two-point conversion, they went into the fourth leading 18-8. Soria and Perkins connected in the fourth again for a 37-yard touchdown pass and Soria ran in the conversion to put the Vikings up 26-8.

"We got the ball in the air although the weather conditions were rough," Brownlee said. "But they were blitzing a lot of people."

The Viking defense held off Joseph City from any more scoring in the fourth and the Vikings took the win.

Brownlee credits the Viking defense for much of the win.

Brownlee said it was an adjustment for the defense in the early season games but the Vikings understand the eight-man game better now.

The team is still working on their passing game, but he was impressed with the offensive play of Pearson, Soria, Perkins and Ortiz.

"That counter with Francisco helped change the momentum," Brownlee said. "He has good speed, he's explosive, strong and fast."

With the win, the Vikings will face Mogollon in Heber City in the first game of the single elimination state playoffs Oct. 24 at 6 p.m.

Mogollon was the only team to beat the Vikings in section play this year. During that game, the Vikings led 14-6 at half-time but the game turned around when Soria went out with a shoulder injury in the third quarter.

"We're going into Mogollon with a lot of confidence," Brownlee said. "It will be a physical, hard-nosed football game and the team that makes the least amount of mistakes is going to win."

"We were one of 12 teams that qualified for state," Brownlee said. "And that says a lot for our team."