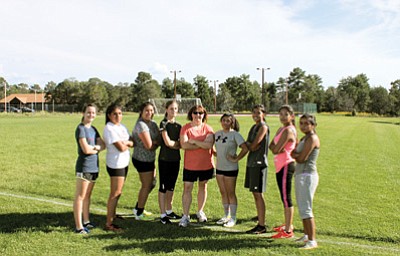 GRAND CANYON, Ariz. - Grand Canyon Lady Phantoms faced a tough season for the first all girl's soccer team at the school. The team walked away 0-7 for the season.

"We didn't have any seniors, which is good, because like I told the girls, 'it's going to be a growing year for us,'" said head coach Gretchen Bilton. "Learning how to play with just the girls, without the boys - we've been co-ed up until now...so we won't lose anyone to graduation."

It was a painful first season for the Lady Phantoms, who took losses right off the bat with ankle, knee and hip injuries in their first several games..

"We have been hampered by injuries, from sprained ankles to herniated discs in the back," Bilton said. "We have played very few games with a full team, but we have played and played really hard."

The Lady Phantoms played only two games with a full team and the injuries started early on with the first games at the Show Low Invitational Sept. 4. The ankle and knee injurys forced two players out of the game, followed by a hip injury by anther player a short time later. During the Camp Verde game Oct. 10, a herniated disc forced Valeria Romero, a junior who played sweeper for the team, off the field.

"She had been complaining about it for a couple of weeks but said, 'I'm fine, I'm fine,'" Bilton said. "Then during the game against Camp Verde she fell and finally went to the doctor. It was a bummer, because she is a junior and one of the leaders on our team."

The closest game for the team was against Holbrook, Oct. 9 when Grand Canyon lost 1-3.

However, Bilton said as a first year all girls team, they pulled together, learned a lot and received praise for their efforts - even the opposing teams took notice of their dedication.

"I think they really flourished and did very well," Bilton said. "Every team we played they said, 'your girls are playing so hard and they're doing great.'"

"I don't feel like they ever got down on themselves," Bilton said. "I think they were really just glad to be able to play, because when they played with the boys they didn't get a lot of playing time."

Sophomore Arilene Rios who played forward position and ended the season as goalie and Monica Gonzales, a sophomore who played middle and forward, made significant progress during the season, according to Bilton.

"She (Rios) really improved a lot," Bilton said. "(Gonzales) was a pretty strong player for us as well...she could play anywhere we needed her."

Now that the season is over Bilton hopes the team will take time to recuperate before the start of basketball season.