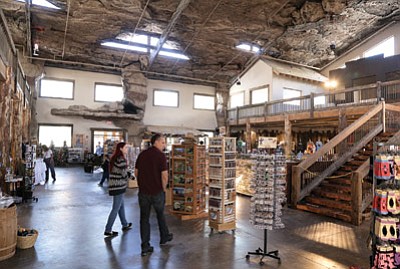 WILLIAMS, Ariz. - A year has gone by since Bearizona began a major infrastructure project and significant progress has been made and visitation at the park is up.

According to Bearizona CEO Sean Casey, visitation to the park is up 30 percent this year and September visitation is up 62 percent compared to September 2014.

Bearizona's expansion plan is also on track. Phase one of the Bearizona expansion included the animal structures and small infrastructure. Phase two includes a well, a lake, three new buildings, and a chairlift. The well is complete and in operation, the interior of the gift shop is nearly complete and is open, the restaurant and office building are in progress and the chair lift is awaiting installation in the parking lot.

According to Casey, drilling began on the well in fall 2014 and although there were a few minor cave-ins, the drillers reached water around 3,600 feet in spring 2015. A pump was installed and operators were able to retrieve 200 gallons of water per minute. Casey offered to share the well with the city of Williams, but negotiations fell through. Casey eventually replaced the pump with a new pump and smaller pipes that retrieve water at 50 gallons per minute.

"We don't really need very much, but when we do a hotel we will," Casey said. "This will allow us to be set as far as our future goes."

Preliminary dirt work for the buildings began in August 2014 with plans for the development to be located behind the existing gift shop trailer.

The priority was the gift shop. The original gift shop was a 500 square foot trailer. Visitors can now explore a 10,000 square foot area that has balconies and a coal miner theme. The ceiling has intricate detail that depicts the inside of a coal mine. The balconies have old west style buildings and allow space for organized programs.

The restaurant portion of the development is the next project Casey will focus on. It will likely open in March 2016. The Kennelly family, who owns Doc Holliday's Steakhouse and Saloon, Station 66 Italian Bistro, Pancho McGillicuddy's and the Grand Canyon Winery in Williams, will run Bearizona's restaurant.

"It's going to be fast casual which means sandwiches, salads, hot dogs, nachos," Casey said. "The Kennellys are renting the space and running it. They're good at what they do."

"We'll also have a jaguar exhibit," said Operations Manager Jocelyn Monteverde. "One wall of the restaurant will be a glass wall to see the jaguars. You'll be eating lunch and you can view the jaguars."

The office building is under construction, but Monteverde said it is not a priority. When it is complete the building will house employee offices, receiving space for the gift shop, an employee break room and a conference room. The lower level will be a room for the program animals, which are used for educational purposes and events.

At the rear of the complex, a large courtyard will be suitable for events with 800-1,000 people. Casey hopes to transform the front of the complex into an area with a town square-type feel. That area will be able to accommodate 3,000 plus people.

The chairlift will be installed in the courtyard area and go over the big bear area and into the white bison and back.

Although this latest expansion is a major undertaking, Casey has more plans for future projects. Once this phase of building is complete he will focus on building a convention-style hotel. The hotel will have several rooms, but more convention space than rooms.

"We'll have more convention space than rooms, so it will help the hotels in town too," Casey said.

He said the hotel will have a glass wall that allows guests to view the bear enclosure and the pond.