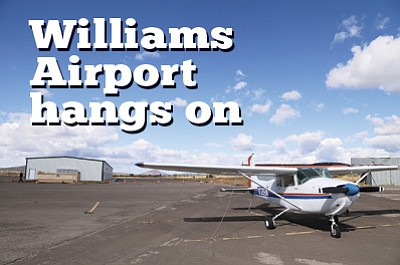 Above: A small Cessna airplane sits in front of a new hangar building at the Williams Airport that can house 10 small planes. Ryan Williams/WGCN

Ten new T-hangars are complete and ready to rent at the airport.

Williams City Council members approved a $507,625 loan from the Arizona Department of Transportation in April of this year for the hangars. The city contributed $9,453 to the project.

According to Public Works Director Kyle Christiansen, six of the hangars have already been rented and several people have inquired about the remaining four.

"Its been word of mouth and simple advertising here at the terminal," Christiansen said. "We'll push a little bit more because our goal is to get them all rented, of course, since it's a loan."

Christiansen said the rent is $325 per month, which is competitive with Flagstaff and surrounding airports.

Finance Director Keith Buonocore said a 10 percent contingency has been built into the budget that would get the city through one year if the hangars did not all rent.

"Considering the costs that people pay for the aircraft, it's not that expensive," Christiansen said. "When an airplane sits out in a hail storm or snowstorm all winter long, you think that would've been nice."

Previously the airport had three usable hangars - one large city-owned hangar that could hold up to three planes and two smaller hangars.

Christiansen said the airport use fluctuates quite a bit. Some weeks15-20 aircraft use the airport and other weeks there are just a few. He said many pilots come to the airport because of fuel costs.

"I've heard that we have the cheapest fuel in northern Arizona right now," Christiansen said. "We have people from Flag that come in for fuel and then fly back out."

The airport's capital improvement program includes plans to use grant money to remove two old hangars in order to resurface and expand the general aviation apron.