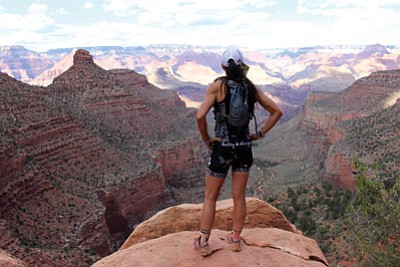 BethAnn Telford and Maria Parker ran rim to rim Oct. 3 to help raise support for brain cancer research and to film a documentary, to give hope to patients and survivors of brain cancer. Photos/Accelerate Brain Cancer Cure and Lucia Parker

GRAND CANYON, Ariz. - BethAnn Telford is an Ironman World Champion triathlete, a serial marathoner and a 10-year brain cancer survivor. Maria Parker is is an accomplished ultra-marathon cyclist and the winner of the 2013 3000 Miles To A Cure. On Oct. 3 they raced 21.1 miles from the North to South Rim of Grand Canyon National Park.

"The Canyon represents the valley of death of under funded research," Maria Parker said. "There's just the beauty of the metaphor - we're standing on the North Rim, we're running down into the valley and then we're climbing up the other side."

Parker and Telford are determined to do their best to bridge the gap of funding in cancer research. During their race any money raised will go to Accelerate Brain Cancer Cure (ABC2), a non-profit organization that drives cutting-edge research and treatments for brain tumors.

In addition to running rim to rim, Teleford and Parker will have their journey documented in a short documentary, "Crossing the Canyon,"

The documentary will tell their stories and extend their impact beyond the Canyon to provide inspiration and hope for those battling brain cancer.

"Cancer is depressing and people don't want to think about it too much, I think," Parker said. "So when I say 'raise awareness' we both want to bring a positive light to it. We want to raise awareness that there can be hope. We can work together, use our gifts and anyone can join us and do anything to bring hope."

Both Telford and Parker have first hand experience with brain cancer.

Telford has not driven in 10 years, she lost some of her memory, has been in and out of hospitals and in a wheelchair. She has worked past a stuttering vocal pattern and seizures. She is a brain cancer survivor, who was diagnosed in 2005.

But before she was diagnosed with brain cancer, Telford was an endurance athlete - a runner who played field hockey and soccer.

"Those were my really competitive sports, it required running, but not the distance running," Telford said. "When I got diagnosed, those things had to stop because I couldn't run."

Telford made her home in Washington D.C., following her passion for a career in politics and federal work. She was running in events and that was when the cancer was discovered.

"That's where my journey started," she said. "That's where I found the brain cancer, on a run. It was mile 19 this all started."

Unable to see out of her left eye, Telford went through treatment and slowly learned to walk and run again. She completed the Marine Corp Marathon six months later.

"(I was) being diagnosed and in a hospital and being told, I was more or less date stamped with a journey of brain cancer, which I didn't know anything about," she said.

As Telford learned to compete again, she decided she would run to raise support and funding for pediatric cancer.

"I just had an ability, I could do something that those kids couldn't," Telford said. "They would decorate my sneakers and my shirt and they would run with me."

At the Ironman championship, Telford carried a flag the last mile with the names of children who were fighting pediatric cancer.

Parker, 52, is a long distance cyclist. She has been riding for about eight years.

"Since I've been an adult, I've done some running, I'm kind of a plodder - not super fast," Parker said. "So these ultra events appeal to me."

Parker owns and operates a bicycle company that sells recumbent bikes. She began racing to help market her bikes when her sister, Jenny, was diagnosed with stage-four brain cancer in 2012

"(Jenny) wasn't just my sister, she was my best friend," Telford said. "We are only 10 months apart and just had very parallel lives."

After realizing there were limited treatment options for her sister, Parker decided to do something about it and became involved in fundraising efforts for brain cancer research. In particular Telford signed up for Race Across America, a 3,000 mile race from San Diego, California to Oceanside, Maryland.

"It was a very exciting event and we were able to raise quite a bit of money for brain cancer research," Parker said.

After learning about Telford's story, the two met and decided together they could raise money for research and give hope to patients and their families, through a very unique event - a rim to rim race across the Grand Canyon.

"BethAnn and I are just really, really motivated to bring people who have cancer and their families hope," Parker said.

Parker and Telford completed their rim to rim race Oct. 3.

According to The Case Foundation, brain cancer is the leading cause of tumor cancer deaths among children and young adults. There are more than 600,000 people in the U.S. today with a brain tumor diagnosis, with another 66,000 new diagnoses expected this year.