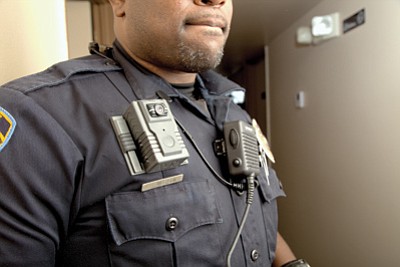 "I'm not afraid of videos," said Williams Police Lieutenant Darrell Hixon. "I've been doing this job for 28 years. Every once in a while I'll make a mistake but I've never made a mistake that's immoral."

On-officer recording systems (also called "body cams" or "cop cams") are small, pager-sized cameras that clip on to an officer's uniform or are worn as a headset. The cameras record audio and video of the officer's interactions with the public.

Hixon is overseeing the implementation of the new body cameras at Williams Police Department. The department received 14 new body cameras in September and has since required the officers to wear them on-duty.

"Each unit is assigned to an officer," Hixon said. "We've had these same devices in the cars, which have the same features that we've used many times."

Hixon said the cameras are WatchGuard Vista HD models. They have two methods to record video. One method records all of the time in the background. The other method is turned on and off by the officer. The second method allows the department to catalog events and retrieve them easily.

The body cameras have the capability to record at 180-degree angles and follow the officer's line of sight.

Research has shown that capturing evidence is just one use for body cameras. The cameras also helped prevent escalation during police-public interactions. Use-of-force incidents by police and abusive behavior by the public toward police also decreased.

Researchers say when the public and officers know they are being recorded, they tend to have a heightened self-awareness during the interactions. Having the cameras becomes a preventative treatment to unacceptable behavior.

"What I like about it is that people do act a different way when they are being recorded," said Williams patrol officer Robert Anderson. "They are more professional because they know that people will be watching them. I love them. It keeps everybody honest."

Hixon believes that the body cameras will be good for the community and the officers. He said it has already reduced the number of false complaints against the officers.

"Now lawyers are getting to see people when they're at their worst," Hixon said. "When they go to court they're cleaned up, sober, off drugs and looking the way their lawyer wants them to. The public is now going to see people as the policemen see them. Be careful what you ask for."

Hixon said the department is still in the process of developing department policy regarding the body cameras. He said he has been drafting policy based on Las Vegas Metro and Surprise Police Departments who have had body cameras for a while.

"It's new technology and there's going to be some legal challenges to it," Hixon said. "So we'll just roll with it."