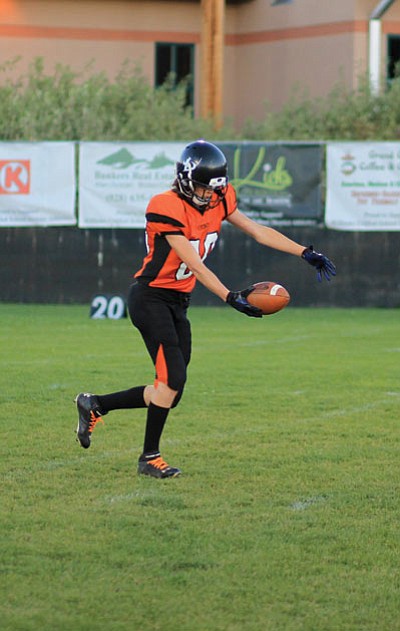 WILLIAMS, Ariz. - The Vikings varsity football team had a rough second half Oct. 2 in Mogollon. The Vikings rolled into half-time with a 14-6 lead, but injuries and errors in the second half allowed the Mogollon Mustangs to capitalize and take the game 32-14.

"Going into this game we believed it was a pretty even game," said head coach Jeff Brownlee. "We believed that the team that made the least amount of mistakes would win this game and unfortunately we made a few more mistakes."

The Vikings took the lead in the first quarter when Martin Soria ran in a 41-yard touchdown. The Vikings attempted a 2-point conversion but failed to convert it.

"We were feeling pretty good about our football team," Brownlee said. "We were moving the ball we were doing some good things."

In the second quarter Mogollon was able to score, but failed on the two point conversion to make it 6-6.

The Vikings continued the battle and with minutes to go before half-time, Soria handed off to Cruz Pearson who took it to the endzone with an 80-yard run. A Soria to Zack Perkins pass on the conversion gave the Vikings the lead 14-6 going into half-time.

"Our team emotionally, we were really high," Brownlee said. "We were just playing good football, both teams were. We felt Friday night was going to be our night."

The team came out in the second half to kick to Mogollon, who in turn had to punt.

On the first offensive series Soria picked up the first down but received a shoulder injury that limited his playing time for the rest of the game. Ethan Johnson was brought in as quarterback.

"Ethan stepped up for us and he did a good job," Brownlee said. "It's just different when you change quarterbacks like that. We moved the ball, but just not how we needed to."

Brownlee said the team began making some errors which Mogollon took advantage of. The Vikings had four turnovers and Mogollon scored on each one.

"The score does not dictate how close this football game was though," Brownlee said. "It was a close football game. It seems a little lopsided but that's only due to injuries we had and just not meeting their intensity."

Brownlee said they are uncertain of the extent of Soria's injury and are planning to give him plenty of rest before he returns to play. The Vikings have two more games before the state playoffs begin.

"We pulled him out to rest that shoulder and heal it," Brownlee said. "We believe he'll be ready to go this week, but we may try to rest him and have him ready to go against Joe City."

Brownlee said the loss to Mogollon was hard on the players, who played an intense game of football and were hoping for a win.

"There were some tears in their eyes," Brownlee said. "They wanted this football game. Unfortunately we were on the short end of the stick. We played with them, we know we can play with them. We'll just build off that this week."

The Vikings are now 3-3 and face Fredonia Sept 9 in Williams, which is the last home game and is senior appreciation night. The following week they travel to Joseph City for the final game of the season before state playoffs begin.